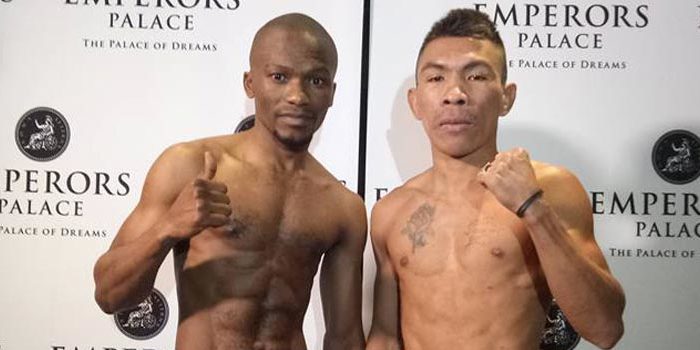 South Africa’s Simphiwe Khonco retained his IBO strawweight belt for the second time when he scored a wide unanimous 12-round points decision over the rugged Filipino Lito Dante at Emperors Palace near Kempton Park on a cold Saturday night.

The 30-year Khonco (47.20 kg) dominated from the opening bell as he piled up the points from behind his educated left jab.

Dante (47.50 kg) was unable to get into the fight and found it difficult to penetrate the tight defence of the South African, possibly only winning one round.

Thabiso Mchunu (90.50 kg) won the vacant South African and African Boxing Union cruiserweight titles when he outscored Johnny Muller (89.30 kg) over 12 rounds in a disappointing fight that never rose to any heights.

The scores were 120-108 on all three judges’ scorecards

The highly touted Mchunu, 29, who has fought with success in America, was expected to overwhelm the 26-year-old Muller, but spent more time throwing punches below the belt and mauling, and had to be warned on several occasions by referee Thabo Spampool to keep his punches up.

The stronger and more powerful Mchunu out-hustled Muller and was the clear winner at the end.

DYER AND TISSEN FIGHT TO DRAW

In the best fight of the night, South African middleweight champion Lee Dyer (75.20 kg) and Alfonzo Tissen (76.10 kg) fought to a 12-round draw in a clash for the vacant African Boxing Union super-middleweight title.

South African welterweight champion Thulani Mbenge (66.30 kg) was taken the distance for the first time when he outscored Jay Inson (66.30 kg) from the Philippines over eight untidy rounds.

The tournament was presented by Golden Gloves Promotions.