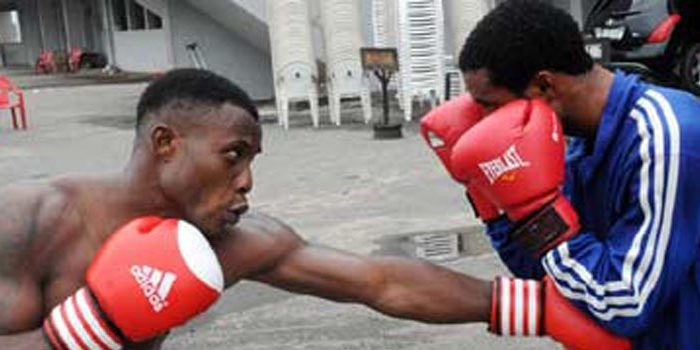 No fewer than 14 boxers on the Nigeria Amateur Boxing team are currently in camp under the supervision of the national team coach, Anthony Konyegwachie, preparing for the Africa Championship set for June 17 to June 25 in Congo.

Konyegwachie told the News Agency of Nigeria (NAN) on Monday in Lagos that the event is a qualifier for the world championship billed to hold in Berlin 2018.

The coach added that his wards were expected to use the event to sharpen their skills ahead of other events lined up later in the year.

“We are getting set for the competition which is the biggest for the athletes we have in camp.

“The young boxers are new on the scene but we have the confidence that they can fly the nation’s flag high in Congo.

“In the past Nigeria has always dominated the competition and it has been a programme we used to expose upcoming boxers to competitive matches.

“The boxers have worked their socks off and are eagerly anticipating the competition to showcase their skills to the world and begin an international career in boxing,’’ the national coach added.

Konyegwachie expressed optimism at the chances of the boxers’ to step into the shoes of their older colleagues who have travelled abroad for greener pastures.

“Our boxing team comprises of seven soldiers, who along with their contemporaries, were drawn from the national boxing championship which held in Lagos in February.

“They were the best in their categories and we are hopeful they can put up that same performance in their very first outing in Congo.

“The likes of Efetobo Apochie and Efe Ajagba were heroes of this great competition and both have gone ahead to represent the nation at world championship and Olympics,’’ the coach said.

He told NAN that four other boxers are also in camp preparing for the Commonwealth Youth Championship set to hold in Bahamas in July.