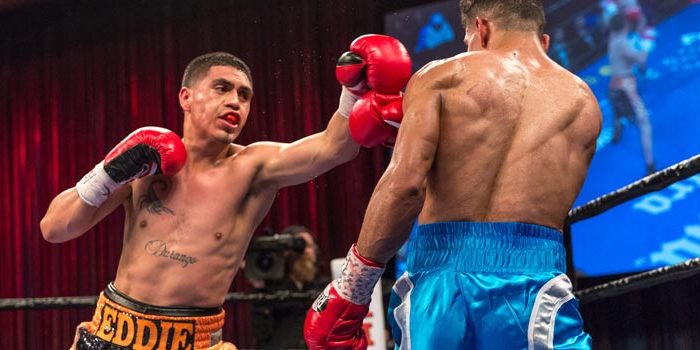 Representing Chicago, Ramirez controlled the fight early by working off of his jab and attacking with both hands on the inside. Bone was able to consistently throw counters back, but Ramirez showed good defensive skills throughout the night, never taking serious punishment.

“I was comfortable in the ring tonight,” said Ramirez. “I remain unbeaten. I put the pressure on and I got the win. I think the fans will start to see me more and more.”

Ramirez began to break through the guard of Bone and had him in trouble in round four before Bone found his composure and finished the round. The second half of the fight saw Bone increase his movement, which seemed to frustrate Ramirez, who was looking to engage and deliver a knockout.

“He made it a little difficult because he wasn’t cooperating,” said Ramirez. “He was running around the ring, but I am proud of my performance. I won and that’s all that matters. I’m going to get back in the ring and get back to training until I get word on my next fight.”

Bone finished the fight strong and believed he did enough to earn the decision.

“I don’t agree with the decision,” said Bone. “I am frustrated because I feel I won, however the judges saw it differently. I thought I landed more punches and I just don’t see how they came to the decision that was made. He was a good fighter, tough opponent, but again I believe the wrong decision was made tonight.”

After the 10-round welterweight contest concluded it was Ramirez who was awarded the decision with scores of 97-93 twice, while one judge saw the bout 97-93 for Bone.

“I want whoever is next,” said Ramirez. “I’m ready for whoever can get me closer to a title shot.”

While Smalls had the reach advantage and was dedicated to his jab throughout the bout, Martinez was consistently aggressive and was able to navigate the distance and punish Smalls with hooks to the head and body.

“I knew the one advantage he had going into this fight was his height,” said Martinez. “But once I got in the ring I saw quickly that he was leaving his body open so I just went in and tried to deliver as many combos and hit the body as much as I could.”

Martinez landed big power punches all night, including a pinpoint right cross that connected with Smalls at the end of round four. A clean left hook staggered Smalls in round seven as Martinez spent the round punishing his opponent, who was barely able to stay on his feet and finish the frame.

After another dominant round to close out the bout, Martinez was awarded the decision by the score of 80-71 on all three judges’ scorecards.

“I wanted the knockout and I think the fans could tell,” said Martinez. “This is my first fight this year, so it’s back in the gym for me as I look to my next opponent. I’ll definitely be ready for anyone.”

The opening bout of the telecast saw lightweight prospect Dennis Galarza (16-2, 9 KOs) record his third straight victory via a unanimous decision over Mexico’s Omar Tienda (18-5, 11 KOs) in their 10-round contest.

The taller Galarza used his length early and landed clean hooks on the inside during round one. Tienda came out in round two intent on making it a rough fight and crowding Galarza to negate his reach advantage.

“I give my performance about a 7.5,” said Galarza. “I knew I was coming into the ring with a tough rugged veteran Mexican fighter and he used that to his advantage, I should have used my jab more.”

Galarza continued to have success with his left hook throughout the night, while Tienda was able to slow down Galarza’s offense in the middle rounds with a relentless body attack. Much of the battle took place in close quarters and in round nine Tienda was deducted a point by referee Robert Byrd for throwing Galarza to the canvas.

After 10-rounds of hard-fought action, Galarza’s clean work and good movement in the late rounds helped him earn a unanimous decision by scores of 100-89, 99-90 and 98-91.

“There was a lot of holding, but it didn’t really affect my plan,” said Galarza. “I wanted the knockout going in but I’m just happy I got the win unanimously. I need to get back in the gym and work on really using my jab and uppercut more and I think that will help me going into the next fight.”