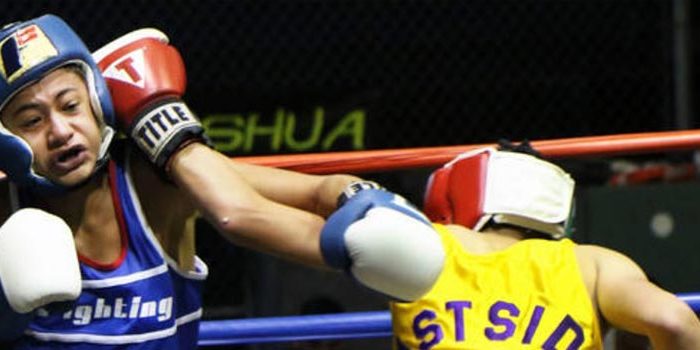 KEAAU – People of a certain age who follow sports and culture had a moment of nostalgia last week when we observed the one-year anniversary of the passing of Muhammad Ali.

If you’re under 40, it probably didn’t mean as much, but for those of us on the planet fortunate enough to take in Ali’s entire career, from his Olympic gold medal days as Cassius Clay, through the three historic bouts with Joe Frazier, the global interest in matches with George Foreman and others, there has been nothing like him ever since.

Since then, boxing itself has declined in popularity, save for the troubling Mike Tyson era. Mixed martial arts, with its cages, more violent and fast-paced action, took over for a while, but Saturday night at Yeshua Outreach Center in Puna, it felt like boxing was making a comeback.

There were 38 of them in Yeshua’s first boxing show of the year, an amateur event sanctioned by USA Boxing that brought together nine Hawaii clubs, five from the Big Island, showcasing boys and girls with an interest in what used to be called the “sweet science.”

They came from Oahu, Maui, Kailua-Kona, Laupahoehoe and all around for what was, for several of them, their first experience at climbing into the ring and getting up off a stool in the corner to confront the opponent coming across the ring.

“It is absolutely picking back up,” said Patty Carmichael, supervisor for the licensed boxing commission that oversees all amateur clubs in Hawaii. “We recently had a show with 101 entries, and for 19 bouts here? People are getting interested, there’s no doubt about that.”

Her interest can be said to emanate from her husband Eiichi, the president of the amateur boxing organization in the state that sanctions the bouts, trains the officials, the referees, timekeepers and all others required to keep the sport safe and somewhat sane.

Somewhat, because fans — there were 350 that came out Saturday — tend to get excited when they see a competitive bout. The headgear and other protective equipment keep the keiki safe and the action in the ring fuels the adrenaline coursing through the young bodies.

Eiichi Carmichael remembers what it was like, learning the footwork, the feints, the constant movement, the telltale indications that an opponent has left an opening. His personal claim to being the only Hawaii two-time national champion, dating back to 1975 (119-pound division), and 1978 (125 pounds) serves him well in his oversight role.

The good news and bad news for aspiring boxers is that Hawaii, so remote from the mainland, is its own region in USA Boxing, so if you win a state title here, you are automatically the regional champ as well.

The downside is that, lacking high-level regional competition, Aloha State boxers often find themselves over their heads at national competition. Not so for Carmichael, who qualified for the Olympics and dreamed of bringing back a gold medal, but his qualification came in 1980, the year the United States boycotted the Olympic Games.

He remains the “uncrowned champion,” and after all these years, he notices interest is picking up in his sport.

“The last two years, it has really been thriving on Oahu,” he said, “but we can see it happening on Maui and here on the Big Island. Numbers are up, people are getting involved all over, it’s a great thing to see.”

Alexis Tanguro, 9, started it all in an opening developmental bout against Sera Varize in a match up of two 80-and-under keiki. No winners were announced, scores were not kept in the 1-minute rounds, but at the end, the coach in her corner was beaming.

“She was so excited,” said Hanna Tanguro, serving as coach and mother for Alexis, “she had a great time in there and she did pretty well for her first time.”

Hanna and her husband, who did not make the trip, have a boxing club — H.R. Boxing — on Oahu and said the sport is great for “mainly self-confidence and just belief in yourself. Of course, knowing how to defend yourself can always come in handy, too,” she said.

At 110 pounds, Traiden Labrador Espinosa of the Eastside Boxing Club, in just his second bout, won a narrow decision over Jonah Kai Villiarimo Jr. of the Yeshua Club.

“This was really good,” Espinosa said moments after the decision. “I was a little nervous, no doubt, but I was listening to my coach, he always knows what’s best.

“My goal is to be the best as I can at this,” he said, “and I don’t know what that is, I only know I have learned a little bit and I have a lot more to learn. This makes me just want to train harder, to work harder and see if I can be the best of the best.”

His coach, Joe Hawthorne, said Espinosa “really listens and tries to do what he’s being told and that’s very important for a youngster just getting started. He’s off to a good start.”

Things are starting up in Mountain View, as well, where Pat Pavao has made the first steps to organize the Mountain View Boxing Club. Pavao has had his 13 year-old son Richard (109-pound division) and two friends, learning the basics in Pat’s garage under the tutelage of former boxer Aleka Rincon, while they search for a more serviceable training space. They got their club sanctioned and made the other necessary requirements to join the show at the last minute.

Then, Saturday night, Pat watched his son climb in the ring for the first time. Richard was tentative at first, seemingly unsure of his left hand so he kept circling to get in position to throw the right jab. His left hand was shy, but the right kept him active and he clearly landed the harder punches, winning the bout.

When Richard’s hand was raised in victory by referee Perry Harada, Pat broke into a jubilant smile, clutching his chest in relief.

“I’m a wreck,” he said. “He wanted to do this, and I’m definitely supportive, but wow, that’s a nervous time watching your kid in there for the first time.”

A little less nervous knowing he has a first-time winner, and that nobody expects another Ali, anytime soon.

But for these young people getting their first looks at the sweet science, just climbing in the ring and giving it all they had was its own victory.