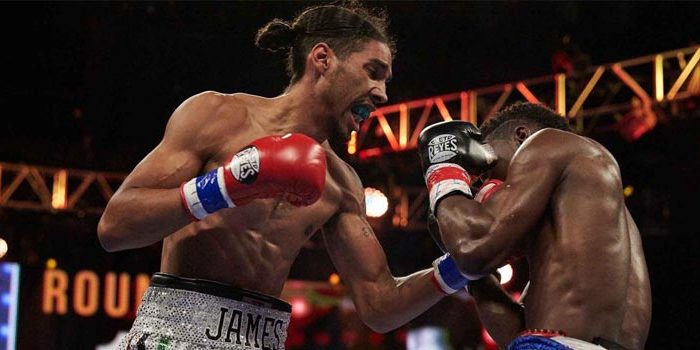 The FS1 show will also see unbeaten prospect Brandon Figueroa (12-0, 8 KOs) competing on his older brother Omar’s undercard as he takes on Eliezer Aquino (19-2-1, 13 KOs) in an eight-round bantamweight attraction.

“I am back at welterweight for my fight on July 15 and I plan on putting on a good performance so that I can get back in the mix for a world title shot,” said Dan. “I am having a great training camp at the Grant brothers’ gym in Montreal and I’ll be in top shape on fight night. My team and I are thrilled to be part of this event that brings big-time boxing back to Long Island.”

Televised coverage on FOX and FOX Deportes begins at 8 p.m. ET/5 p.m. PT and also features unbeaten light heavyweights Marcus Browne and Seanie Monaghan in a 10-round bout and a showdown between Polish heavyweights Artur Szpilka and Adam Kownacki.

Tickets for the live event, which is promoted by DiBella Entertainment, start at $50 (not including applicable fees) and are on sale now. Tickets can be purchased online by visiting www.ticketmaster.com, www.nycblive.com, or by calling 1-800-745-3000. Tickets are also available at the Ticketmaster Box Office at NYCB LIVE. Group discounts are available by calling 516-231-4848.

A tall welterweight at 6’2″, James looks to bounce back after a decision loss to Yordenis Ugas last August in which the 28-year-old accepted the fight on less than a week’s notice. Fighting out of Minneapolis, Minnesota, James was unbeaten in his first 20 fights as a pro including impressive victories over Javier Molina and Wale Omotoso that began his 2016 campaign.

Born in Romania, Dan fights out of Quebec, Canada and has picked up victories in two of his three stateside fights. A pro since 2004, Dan was unbeaten in his first 26 professional starts. He owns two impressive victories over Canadian rival Kevin Bizier and challenged Kell Brook for his welterweight title in 2015. Dan fought twice at 154-pounds, including a challenge of now world champion Jarrett Hurd, before moving back down in weight and scoring a fifth-round stoppage of Jesus Gurrola in March.

The 20-year-old Brandon Figueroa turned pro in May of 2015 by defeating Hector Gutierrez and followed that up by stopping Ricardo Mena, Ramiro Ruiz and Francisco Muro to close out the year. The Weslaco-native stayed busy in 2016, picking up six victories, including five by way of stoppage before starting 2017 with a fourth-round stoppage of Raul Chirino in February and an eight-round decision of Luis Saavedra in May. On July 15 he will fight on the undercard of his brother Omar for the third time.

Fighting out of Higuey, Dominican Republic, Aquino has fought professionally since 2007 and was unbeaten in his first 18 pro bouts. The 30-year-old has previously fought twice in the U.S. heading into this showdown on July 15. Aquino enters this bout having won his last two bouts by way of stoppage.