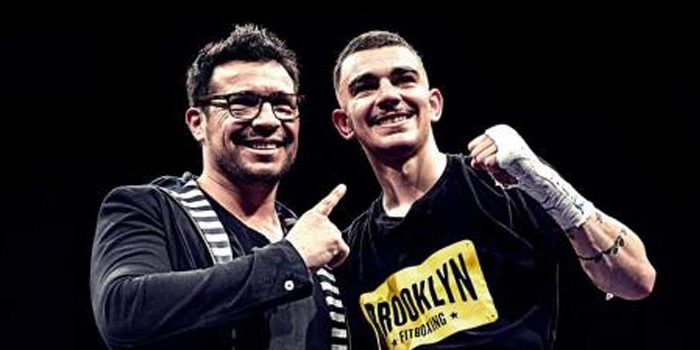 Martinez, known for his extensive career and impact inside the ring and now at the helm of Maravillabox Promotions, has worked with Fernandez since his pro debut at only 19 years old. Fernandez (12-0, 10 KOs), who is co-promoted by DiBella Entertainment and MaravillaBox Promotions, has remained undefeated and undeterred, climbing up the prospect ranks with five fights in 2015, another five in 2016 and now getting ready for his third fight this year.

In addition to June 9’s ShoBox being Fernandez’s third fight this year, it will also be his third time fighting on American soil as he opens the SHOWTIME telecast facing tough opposition in Juan Reyes (14-3-3, 2 KOs) for what could be an important fight in his development as he tries to turn from prospect to contender.

The card, which takes place during the 2017 Hall of Fame Weekend where longtime ShoBox analysts Barry Tompkins and Steve Farhood will be inducted into the International Boxing Hall of Fame, features undefeated super lightweights Regis “Rougarou” Prograis (19-0, 16 KOs) and Joel Diaz Jr. (23-0, 19 KOs) in the 10-round main event. The co-feature will pit Steve Rolls (15-0, 9 KOs) against Demond Nicholson (17-1-1, 16 KOs) in an eight-round super middleweight bout.

Tickets for the event, co-promoted by DiBella Entertainment (DBE) and AASHA Record Breakers, are priced at $65 for ringside, $50, $40 and $30 (may be subject to additional fees) and are available at the Turning Stone Box Office, by calling 877-833-SHOW, or online at Ticketmaster.com. Doors will open at 7:00 p.m., with the first bout scheduled for 7:30 p.m.

This week Martinez and his protégé, “JonFer,” spoke to SHOWTIME Sports about what the future might hold for the 130-pound prospect.

How would you describe Jon Fernandez’s style?

“I believe that JonFer is a very well-rounded, complete fighter. He can take advantage of his great wingspan and reach but has no problem fighting in close distance. Furthermore, he’s hitting really hard. I believe we’ll see him fighting with big names in the division soon.

“JonFer has a classic boxing style—a classic, orthodox style. He’s effective when he’s attacking as well as defending. He poses a vision and a combat insight that is truly amazing. Not only does he have speed and precision, but he also has potential in his fists. But, the best characteristic that JonFer possesses is his great professionalism in the sport and in his personal life.”

What would you say is different in Jon compared to other boxers in the division?

“His head, he is very mature for his age. In that sense, he reminds me of myself. He is very serious when he’s working and always looking to improve.

“He has a stupendous perception of the errors his rivals make. He knows how to read the battle and knows when and how to define a fight. I believe that the more fights and time go by, JonFer will establish himself at the top level alongside the top boxers in the world.”

As Jon develops, what plans do you have for him?

“To continue with the hard work like we have to this date. I respect every step in his career. I’d like for JonFer to continue training and preparing himself for what can be a bright and stupendous future.”

“All of the names mentioned are already great champions. They are all owed their due respect and it would be an honor, not only for Jonfer but for Maravilabox to have the possibility of making fight with any of them.

“Jose Pedraza would be a great test. We’d really like to make that fight happen. JonFer has sparred with Frampton before his rematch with Santa Cruz and we know he was up to the challenge. And of course, we would love to go for the world title against Gervonta Davis and think it would be a great fight. A clash of styles.”

What belts do you want him to go for first?

“First, we’d like him to set a good base. The best for us is to continue building his career step by step and for him to continue learning and adapting himself bit by bit to the top level. As we continue making fights happen, there will be more opportunities for international and world titles. The goal is to get JonFer to become a WBC champion, the most important entity.

“We would be really excited to be able to win the European championship, but we’re ready to fight anyone. All of the belts are important and provide experience.”

What would you see as the ideal next step for JonFer in the next few years?

“Ideally we want to keep him at a weight in which he feels the most comfortable. As fights and time go by, if he needs to go up in weight, he’d do so without a problem. It’s possible for him to end up fighting in superior divisions, but for now we are focused on 130 and I think he can still battle at this weight for several years.”

Can you name who you think are the top five active boxers today?

“I really like Errol Spence Jr., he has a great style that I feel is like mine was. Canelo [Alvarez] and [Gennady] Golovkin are two of my favorites as well, they’ll put on a great fight. Andre Ward, Jorge Linares… There is a lot of talent in the sport at the moment.

What memories of Steve Farhood and Barry Tompkins stand out to you?

“Yes, of course, I have some great moments of my years in the United States and I remember Steve always in front of the SHOWTIME cameras. He is a great professional.

“He is one of the highest-regarded boxing writers in the world. He is a man with a young mentality who knows how to appreciate good boxing.

“Barry Tompkins is a prestigious commentator and what I remember the most about him is seeing him commentate on fights in the era of Tyson and J.C. Chavez. To be a commentator of that stature then, he had to be an excellent professional.”

What would you say is the best (and worst) part about being a promoter?

“To be a promoter is thrilling. I believe that taking the career of the boxers in your hands must be treated like it’s your own life. It’s a true adventure. I can’t find a negative thing to say about being a promoter.”

Do you miss being a boxer?

“To this day I can say that I do not have any desire to return to the ring. My last fights were torturous and I still have problems with my knee to the date as I try to go about my daily life. I continue to train an hour each day and continue to love boxing, but now I prefer watching the youngsters like Jon and help them with my experience.”

Can you tell us what it is like for you to work with someone like Sergio Martinez?

“It’s great, Sergio is always very attentive and a mirror to watch yourself in. Like an athlete, he was one of the greats, but as a person he is even better. Maravillabox Promotions is composed of thorough professionals and the way they treat me is excellent.”

How is your training going? Is your camp any different for this fight?

“I haven’t had too much time since my last fight, just about five weeks. It has been tough, but we were coming off of a much more difficult preparation in fighting for Spain’s world title. I think this will make for a great fight and the fans will have a lot of fun.”

What are your plans for the future? In your career, life, boxing, in the next five years…

“I just got married in April and it was a great experience, the happiest day of my life. I would love to have kids soon. As far as boxing goes, of course I’d like to be a world champion. But first I’d like to go for the European title. I’d like to fight against the best prospects in the division and continuing to make great fights. I will be a world champion one day, I know I can get there.”

Who would you say is your all-time favorite boxer?

“I can’t just say one, I have several. Sergio Martinez, obviously. I also really like Terrance Crawford and Juan Manuel Marquez. Out of the boxing legends, I’ll stick to Alexis Arguello.”

Tompkins will call the ShoBox action from ringside with Farhood and former world champion Raul Marquez serving as expert analysts. The executive producer is Hall with Rich Gaughan producing and Rick Phillips directing.

About ShoBox: The New Generation