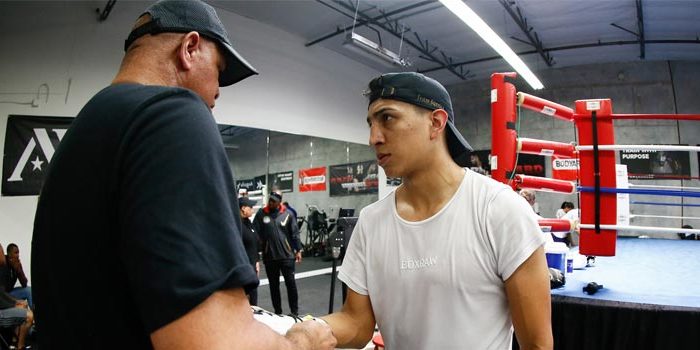 LANCASTER, CA. (June 8, 2017) – Unbeaten rising contender Mario Barrios shared his thoughts about his training camp and more as he nears a showdown against Mexico’s Jose Luis Rodriguez on Sunday, June 11 in Premier Boxing Champions on FS1 and FOX Deportes action live from The Pioneer Event Center in Lancaster, California.

Tickets for the live event, which is promoted by TGB Promotions, are priced at $30 and are on sale now. To purchase tickets visit the Pioneer Event Center’s website: www.uavpec.com

Here is what Barrios had to say about training camp, his matchup and more:

“Unfortunately, in the last twelve months, I’ve had two opponents come in overweight when I was scheduled to fight on national television.  I was ready to fight both times but my team advised me to cancel the bouts because the fighters were at least 10 pounds above the contracted weight.  Jose Luis Rodriguez is a very tough fighter who went the distant with Felix Verdejo, who many people consider a top prospect.  I just hope Rodriguez makes weight and the fight happens because I’m ready to shine.”

On his return to FS1 & FOX Deportes as the co-main event:

“I’m very excited to be returning on FS1 even though I’m not the main-event as I was scheduled to be last month.  My management team once again is putting me in a great position on national television.  In this fight, I’m the co-main event and I’m eager to showcase my talents at super-lightweight.  I’m going to put on a great show for everyone watching.”

On his recent training camp with Virgil Hunter in California…

“Virgil and I are working great together.  I feel I’m constantly getting better with Virgil each and every day we are together.  He’s a great motivator and I’m pushing myself to become a stronger, faster fighter.  I’ve been in camp for the last three months and I’m like a lion ready to come out of his cage.”

On fighting in Lancaster, CA…

“I’ve fought several times in California and the fans out here are incredible.  This will be my first time fighting in Lancaster and I’m expecting the same lively crowd.  The fans are what make this sport go so expect me to come out guns blazing.  I’m going to explosive in this fight.”