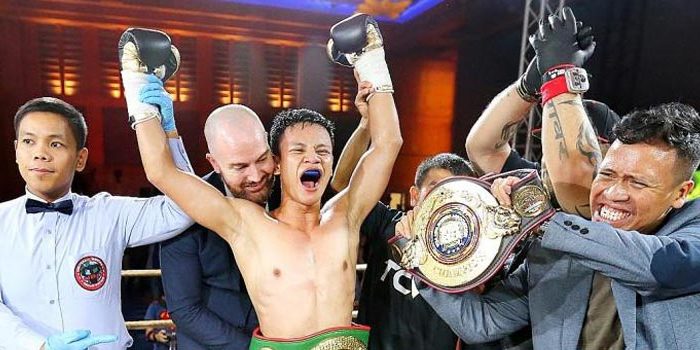 With his fourth-round knock-out of Tanzania’s World Boxing Association (WBA) Pan African champion Fadhili Majiha at the Roar of Singapore II event, he has risen from 110th to 64th in the world rankings.

Yesterday, the 29-year-old received another boost when he signed a two-year deal to be managed by Ringstar Management, founded by Briton Scott O’ Farrell.

Under the deal, O’ Farrell will be in charge of setting up his future fights, and will also provide overseas training opportunities for the Singaporean.

Said Ridhwan: “I sat down with Scott and discussed the plans he had for me.

“And I feel he can make things happen.”

O’ Farrell, who organised the Roar of Singapore II event, said: “In terms of technical skill as a boxer, he’s there.

“What we want now is better opponents for Ridhwan, and maybe give a change of scenery and have him box outside the country.

“We want to see Ridhwan go as far as possible. To me, there are no boundaries.”

Already, Ridhwan is pencilled in for an overseas training stint at the Mayweather Boxing Club in Las Vegas – owned by boxing megastar Floyd Mayweather Jr – in August.

When he returns from that trip, Ridhwan will turn his attention to a match for the vacant International Boxing Organization (IBO) Intercontinental title at the Ringstar III event in October.

The intercontinental title is considered the second-biggest in the promotion, behind the world title.

Said Ridhwan: “A win would get me on the radar of the top guys in the four promotions.

“To be able to be in that position would be amazing, especially considering super featherweight is a very big and tough division.”

Aside from Muhamad Ridhwan, other top local professional boxers like Rafi Majid and Nurshahidah Roslie are also set to feature on the Ringstar III card.

There are also talks to hold invitational amateur boxing bouts on the undercard of the Ringstar III event, featuring national boxers from the Singapore Amateur Boxing Association, and those from around the region.

Said O’ Farrell: “A lot of times in boxing, people don’t know how far they can go, because they’ve never had the opportunity.

“But now we’re shining the light on Singapore and our boxers.”