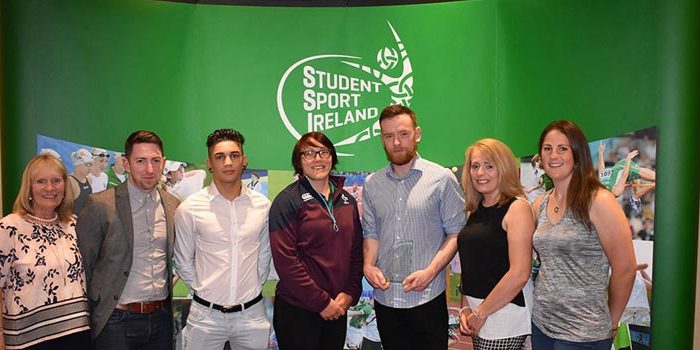 The Institute of Technology Carlow Boxing Club has been awarded the Student Sport Ireland Event of the Year 2016/2017 for the Showdown in the Barrow boxing event it hosted last December.

The event has been described by DCU Boxing Coach and Irish Athletic Boxing Association (IABA) coaching tutor Derek Ahern as “by far the best all-round amateur boxing event I have witnessed”.

Every year, Student Sport Ireland calls for nominations across sports departments in colleges across the island of Ireland for the best intervarsity events that year. Institute of Technology Carlow was shortlisted as one of three finalists, alongside against UCD (Sailing Event) and UU (Kayaking Event), and announced as the overall winner last Thursday at the Student Sport Ireland Networking Event in Belfast.

The Showdown in the Barrow boxing event was the culmination of eight weeks of planning by the Institute’s boxing club, with assistance from the students in the Department of Science and Health, Students Union aided by the support Sports Office and Estates Department. Their objective was to create an event to showcase, beginner and intermediate third level boxers in colleges across Ireland.

They achieved this and more in a sell-out event that included weigh-ins, 12 evenly-matched bouts, an MC, ring girls, IABA referees and judges, individualised entrance music, a match programme, trussing, lighting and smoke. The event was attended by over 350 with guests including the chairperson and secretary of the IATBA.

Credit was given to the organising committee for utilising every resource. The first-aiders ringside comprised student volunteers studying sports rehabilitation and athletic therapy who were fully trained in Occupational First Aid and organisers succeeded in running the event at a profit with over €1,000 raised for IT Carlow boxing club.

Speaking about the Showdown in the Barrow, eight-time national senior champion boxer Neil Gough said “I have been to many tournaments where the home boxers winning at all cost is the most important thing, even if it means over matching some boxers. This doesn’tt happen at the I.T. Carlow Tournament. As a coach, it is also reassuring to know that all referees and judges are IABA accredited so you know the safety of all boxers is ensured.”