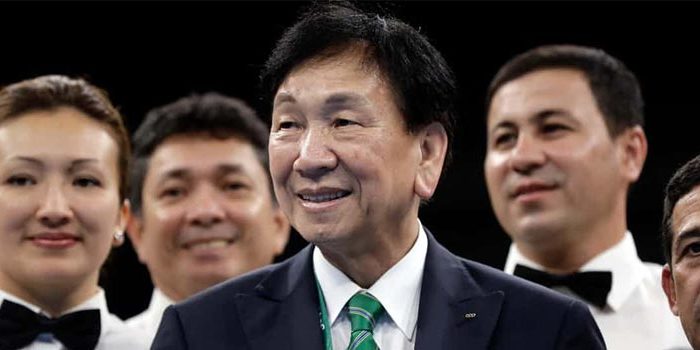 Amateur boxing’s governing body, AIBA, faces the risk of bankruptcy after demands it immediately pays back millions of pounds in loans and investments it does not have, a senior figure in the organization has claimed.

The revelation comes amid an increasingly bitter civil war inside AIBA, which has led to the resignations of its treasurer and finance director following claims they were sidelined by the president, Wu Ching-Kuo (pictured). Earlier this month an executive committee member was also removed by Wu after raising questions about possible “deficiencies and irregularities” in AIBA’s finance and governance – before being dramatically reinstated by Swiss courts earlier this week.

These problems are the latest to plague the organization that came under heavy fire last year following a series of dubious decisions at the Rio Olympics – with the Irish boxer Michael Conlan making global headlines after claiming he was “robbed” in his fight with the Russian Vladimir Nikitin. However, insiders at AIBA believe this latest crisis could be the gravest yet.

One concern is a letter from the Azerbaijani company Benkons, demanding AIBA immediately repay a $10m (£8m) loan from 2011. That is over £2m more than AIBA has in its accounts, a source has stated, despite the body having already received the £14m investment from the International Olympic Committee to see it through to the Tokyo 2020 Olympics. One senior AIBA figure told the Guardian: “If Benkons are allowed to foreclose on that debt, we are no position to pay it. We will be bankrupt.”

AIBA says it is “capable of reimbursing such guarantee on the basis of the repayment schedule agreed with Benkons”. In a statement to the Guardian it added: “It must be noted that the bankruptcy of a Swiss association requires under Swiss law an official confirmation, and we are far from having such judgment. Legal proceedings generally take years.”

Benkons insists any claims that a repayment schedule has been agreed are “false” – and they rejected such a proposal earlier this year.

In a letter to the AIBA acting-executive director, William Louis-Marie, dated 19 July and seen by the Guardian, Benkons writes: “In a letter yesterday you asked for Benkons to accept and sign what you call a previously ‘agreed’ repayment schedule for the $10m loan that was given in 2011 but was due back by 2013.

“To be clear that is false. We have not agreed any repayment schedule nor have we signed any written agreement. We hereby demand full repayment of the $10m loan to AIBA, which president Wu personally guaranteed on behalf of AIBA, and which was due in 2013.

“If we do not receive immediate and full repayment of the $10m from AIBA we will instruct our lawyers to take legal action against AIBA and its president for recovery in the Swiss courts.”

To make matters worse, AIBA has also been served documents by the Chinese company First Contract International Trade in Hong Kong demanding it pay back an 18.99m Swiss francs (£14.65m) investment which it put into AIBA’s marketing arm, BMA.

In a recent letter seen by the Guardian, the FCIT chairman, Di Wu, accuses AIBA of “mismanagement” and “greatly infringing on my rights”. He also questions why AIBA signed a new agreement with another Chinese company AliSports – and why the BMA’s board of directors decided to wind up the BMA after it was several million pounds in debt.

“These actions have already seriously breached all business ethics and even the Swiss law,” Di Wu writes. “The reality turns out to be far away from what the president Wu committed.”

In response, AIBA told the Guardian that one of the main problems was that Di Wu only gave them 18.99m of his proposed 35m Swiss francs investment. It added: “FCIT’s loan against BMA is subordinated to all un-subordinated debt of BMA and that, in case of bankruptcy, the loan is waived to the extent the liquidation proceeds are not sufficient to repay it. Based on these assertions and the validity of the subordination agreements, we remain confident that the claim to reimburse the 18.99m is not valid.

“The term ‘mismanagement’ is also disputed,” the AIBA statement adds. “The current financial crisis of BMA results from several factors and we would like to point out that all strategic decisions have been approved by all BMA board members including Mr. Di Wu, but the fact FCIT did not complete its investment appears to be one of the main factors having led to the financial crisis of BMA.”

In a letter to AIBA’s executive committee last month, Di Wu suggests he did not put more money into BMA because it was losing millions – and that his requests for more board meetings, a credible business plan, and a “specific and clear report on this unreasonable huge loss” were not being met.

“Somehow, since then some people think I should be blamed for the consequence of the improper action of BMA because I didn’t continue my investment,” he writes. “However, you might now know that it’s an absurd excuse. I believe you all understand the principles and requirements for a business investment. If there are unreasonable serious problems in the BMA, it is irresponsible to put more money before those problems are clearly investigated and solved.”

Questions have also been raised about Wu’s autocratic leadership. In May, AIBA’s treasurer, David Francis, resigned citing differences with the leadership. In his resignation letter, he said: “I am not provided with information and I am not included or advised of decisions being taken which may seriously impact on AIBA’s financial health.”

Shortly afterwards AIBA’s financial director, Rob Garea, also resigned, before suggesting he was not consulted on key contracts and was worried about accounting irregularities at AIBA.

In a letter to executive committee members seen by the Guardian, Garea also raised concerns about the spending of the organization. He wrote: “The president’s office in Taipei is paid for – at the cost of 200,000 Swiss francs a year with another 120,000 of the president’s representational fees, including travels, per diems and merchandising giveaways paid for by AIBA. That is more than AIBA has given to its five confederations to help fund and promote the sport over the past 12 months.”

The Guardian also understands there is consternation that the organization’s legal fees have been over one million Swiss francs over the past year.

Added Garea: “In my opinion, the money spent on legal, communication and travel fees is out of proportion and wasteful. AIBA HQ focuses heavily on presidential PR management. I believe the management culture of the organization is neither inclusive nor transparent and needs reforms.”

In response, an AIBA spokesperson told the Guardian: “President Wu Ching-Kuo does not receive any remuneration in respect of his function as he has accepted to handle this important position on a volunteering basis. AIBA has 2001 national federations affiliated and its president travels more than 200 days per year to meet our members and attend boxing events.

“Concerning the expenses related to the president office in Taipei, please note that yearly expenditures do not exceed 200,000 Swiss francs and all costs, approved by the AIBA executive committee, are meant to cover the administrative expenses, travel and accommodations and activities related to his position.”

Earlier this month Terry Smith, the AIBA Welsh executive committee member who had written to president Wu and other senior members of AIBA to demand answers to some of the concerns raised by Garea, was removed. In a letter in June, Smith had urged Wu to clarify a number of issues, saying: “The content of the finance director’s letter to EC members have given me great concern for the future of AIBA because it implies there may be serious deficiencies or irregularities in finance and governance.”

Wu responded by saying a full financial report would be provided to executive committee members when they meet in Moscow on Monday and he had commissioned a review to improve AIBA’s corporate governance.

Shortly afterwards Smith was removed from AIBA’s executive committee – with Wu claiming it was because he was no longer an honorary member of Welsh Boxing. Others, however, believe Wu wanted to see a vocal critic out of the way. Smith immediately took AIBA to a Swiss court and earlier this week was able to overturn the decision.