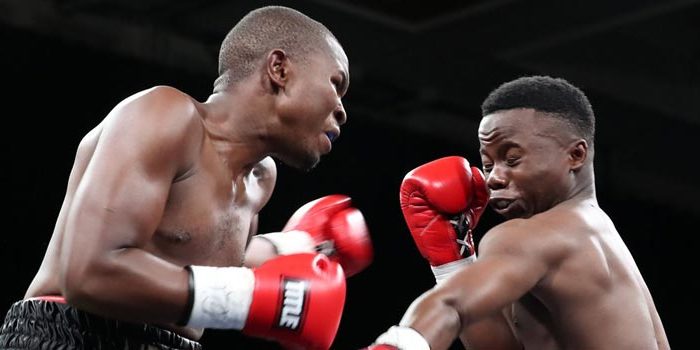 However, it was an unfortunate debut contest for newcomer, Moabi Ngaka, who lost his first ever fight in the professional set up to the experienced South African Sibusiso Hlongwane.

In some form of interval from locals versus international boxers a pleasing crowd that had turned out to witness the boxing bonanza were treated to some fine local boxing extravagance in the super-featherweight bout featuring Kutlwano Ogaketse versus Onkarabile Mothibedi.

The bonanza was more of a replica of crowd pulling matches played in the ambient MGM Grand Arena or the Mandalay Bay Resort in Las Vegas.

The Melroy boxing stable’s Mothibedi stayed in control of the rhythm of the match with his excellent movement and cute hand speed.

However, a unanimous decision from the four judges at the end of this high-octane clash was waved in favor of Ogaketse, who looked more energetic at the end of the fourth and final round.

The much-anticipated international match between Bagwasi and Namibian Rafael Lita started with the expected pace with the host opening with a flurry of quick shots.

The experienced Namibian looked good in the opening exchanges handling his defence with great gusto.

However, Bagwasi had too much stamina at the beginning of the third round.

As the fourth round wore on an exhausted Lita received consecutive shots from his opponent’s strong hooks and staggered to the ring no longer able to stop Bagwasi from hurting him.

The referee stepped in and stopped the fight handing Bagwasi his second knockout win in his professional career.

Bagwasi is now eyeing a challenge against WBA Pan African featherweight champion, Rhofiwa Maemu, who defeated his Tanzanian counterpart, Fhadili Majiha in the last act of the boxing extravaganza.