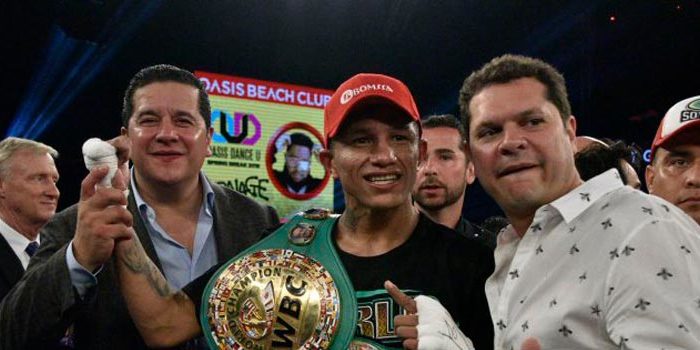 It’s becoming an increasingly embarrassing scenario, where an unprepared Ghanaian boxer is treated like one by a world class opponent. Ghana’s Maxwell Awuku tasted canvas twice before suffering a third-round TKO loss to Mexico’s Miguel Berchelt.

It was the second defense of Berchelt’s WBC World super featherweight title. His hometown fans at the Plaza de Toros in Cancun, Mexico, were treated to a one-sided mismatch that was apparent from the opening bell.

Concerns remain over how these Ghanaian fighters are being prepared for the world stage. Are they being prepared at all, or are their teams simply looking to cash in on the first decent check dangled in front of their faces? It may line their pockets, but only serves to make Ghana look bad on an international level.

This story line is becoming all too common. Last week, Ghana’s Habib Ahmed looked inept and out of his depth facing a young champion in Gilberto Ramirez. Earlier that night, veteran Thomas Awimbono was blasted out in one round by a Jesse Hart who barely broke a sweat.

Sensing his foe was clearly outmatched, the champion picked up the pace in the second. Awuku finally let his hands go, but his blows were of the defensive variety as he struggled to keep Berchelt off of him.

The Ghanaian was introduced to the canvas courtesy of a lead right midway through the right. Awuku rose on unsteady legs and waded back in, only to be dropped again by a stiff jab. Berchelt was relentless, pounding Awuku after the Ghanaian lifted himself off the mat. When more right hands drove the challenger to the ropes, referee Hector Afu wisely stepped in. Official time was 2:46.