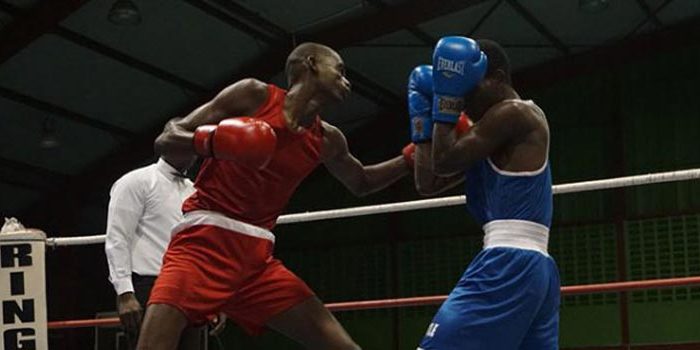 GUYANA and Caribbean junior welterweight champion Colin `Superman’ Lewis had an early night on Sunday as he rocked St Lucia’s Nathan Ferrari with a wicked left hook to jaw, sending the junior welterweight champion to sleep at one minute 54 seconds of the first round in their contest of the Guyana Boxing Association/McDonald’s Promotions boxing card at the National Gymnasium.

Prior to the contest, which was deemed a grudge match, St Lucia Boxing Association president David `Shakes’ Christopher had warned that his charge (Ferrari) was coming to avenge the first-round knockout loss he suffered at the hands of Lewis in December at the Caribbean championship.

However, Lewis picked up from where he left off just two months ago and, like in December when he faced Ferrari in his hometown, did a fine demolition job.

Ferrari came out looking good and kept very close to the taller Lewis, preventing him (Lewis) from using his height and reach advantage, but just after one minute of the first round, Lewis caught Ferrari with a solid overhand right that sent the St Lucian sprawling to the canvas, causing referee Lawrence Assanah to issue an eight-count.

On getting back on his feet, Ferrari continued to keep close to Lewis, but the Guyana junior welterweight champion would have none of that as he saw the opening to land an overhand right followed by a wicked left hook that sent the St Lucian sprawling to the canvas for the full count.

Aleshia Jackman ((right) connects with a right jab to the head of Ann Joseph of Region One during their female flyweight contest at the National Gymnasium on Sunday night. (Photo by Samuel Maughn)

The much anticipated bantamweight clash between Guyana and Caribbean bantamweight champion Keevin Allicock and Trinidad & Tobago’s Christopher DeFreitas did not materialise as the Trinidadian was a no-show. The GBA did not give the reason for the Trinidadian’s non-appearance.

However, Jamal Eastman of the Rose Hall Gym filled the void but did not see out the three rounds as the Berbician abandoned the contest three seconds into the final round after absorbing a great deal of punishment at the hands of Allicock.

Earlier in the night’s 14-fight card, the local boxers completely dominated things against their counterparts from neighbouring Suriname, winning all three of the international fights on the card.

In the Youth lightweight contest between Christopher Moore (Guyana ) and Toni Lin (Suriname), Moore scored a unanimous points decision win against the Surinamese who, in all fairness, put on a good show and at one time seemed to have been enjoying the better of the exchanges.

In the Open lightweight category, Guyana’s Joel Williamson registered a unanimous points-decision win over Blond Pikienito. Desmond Amsterdam (Guyana) caused the referee to stop his contest against Kelvin Wielzen (Suriname) at one minute 41 seconds of the second round.

Ravin Rodrigues of Region One Boxing Gym had the referee stop his junior lightweight fight against Christopher Romeo of the Vergenoegen Boxing Gym at two minutes 30 seconds of the third round.

In the Youth bantamweight division, Justin Whinfield of Pocket Rockets Gym earned a split-decision win against Jason Worrell of Vergenoegen while in the lightweight category, Shaquel Wright had the referee stop his contest against Ajay Jageshar of Andrew Lewis Boxing Gym at one minute 40 seconds of the first round.

In the same weight category, Omar Pollard of Pocket Rockets scored a unanimous points-decision win against Junipor Hyman of Vergenoegen.