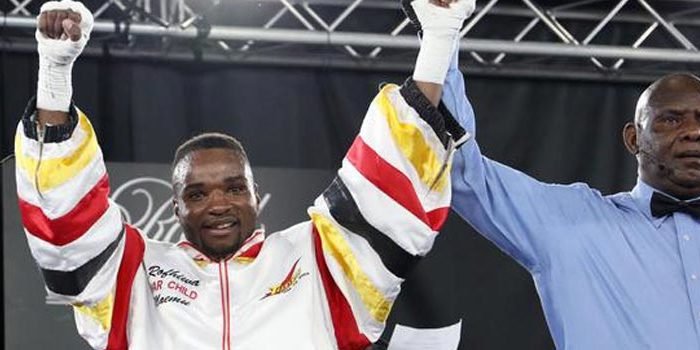 MBABANE – Just as he promised, Rofhiwa Maemu brushed aside his weight issue on the eve of this fight to retain his WBA Pan African featherweight title after just three rounds at the Royal Swazi Convention Centre on Friday night.

Maemu weighted 250 grams more than the maximum of 57.153kg his division allows.

He had to shed that weight in two hours to be eligible to defend his title against a boastful Haidari Mchanjo, who said Maemu had already made the first mistake by failing to monitor his weight.

The Tanzanian promised to knock Maemu in the sixth round.

The champion finished the job in half of that time with a technical knockout in the third round.

Maemu came into this fight focused after suffering the embarrassment of almost losing his belt without stepping into the ring.

He went on the offensive from the onset against his shorter opponent who kept ducking and diving.

Maemu pried him from the ground with his ferocious punches that showed why he is nicknamed “War Child”.

Maemu ensured that both titles that belonged to South African fighters returned to the country from Swaziland.

Rofhiwa Maemu of South Africa (white) gets stuck into Haidari Mchanjo of Tanzania in Mbabane on Friday. Photo: Muzi Ntombela/BackpagePix

The Kenyan, who boldly stated that he isn’t here to sight-see but came to take Nkosi’s belt, threw the towel just before the start of the sixth round in an intense clash.

It was a fight that pitted youth versus experience.

The 30-year-old Odhiambo has been around the block and has fought on three continents – Africa, Europe and North America.

Nkosi is an upcoming star who was nominated for Prospect of the Year at last year’s Boxing South Africa Awards. Nkosi showed why he is a bright prospect by easily brushing aside his more experienced opponent.

Odhiambo had powerful punches that didn’t trouble Nkosi, who was faster than him.

The South African patiently chipped away at the Kenyan, who finished the fifth round with a broken nose.

That was to be the end of the contest as Odhiambo didn’t return for the sixth round.

The opening four-round fight between Tshepang Babui of Botswana and Vusumuzi Nyawuza of South Africa ended in a draw.

Botswana triumphed over South Africa in the two six-round fights that came after the opening bout.

Sikho Nqothole made light work of his South African counterpart Lemohang Mapitsi in their fight scheduled for six rounds.

Nqothole floored Mapitsi twice in the first round before the referee ended the bout after one minute and 29 seconds.

* Njabulo Ngidi is in Swaziland courtesy of Fox Sports