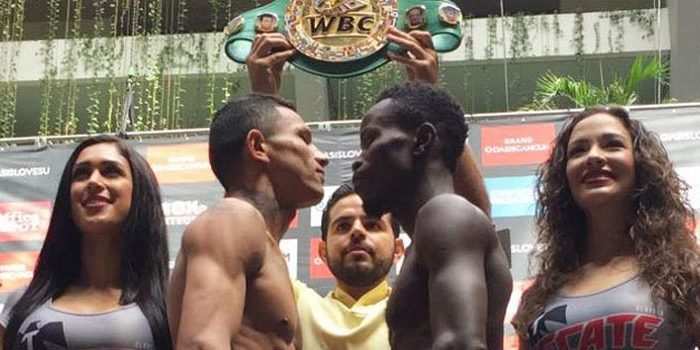 ‘The Channel of Champions’ will showcase the Mexican big-hitter as he looks to continue his destruction of the 130-pound division following a successful 2017 that saw him stop Francisco Vargas to win the title before defending it against Japan’s Takashi Miura.

With a record of 32-1, with 28 KOs, he now takes on the experienced Awuku who has amassed an impressive 44-3-1, with 30 KOs record, and will now be looking to snatch away Berchelt’s world title in front of his rival’s home fans in Cancun.

Pound-for-pound star Vasyl Lomachenko holds the WBO version of the world title at super-featherweight with Berchelt hoping a win over Awuku this weekend will help to set up a unification fight with the Ukrainian superstar.

However, Ghana has a rich history of producing world champions including the likes of Azumah Nelson, Ike Quartey and Joshua Clottey, something which the teak-tough Awuku will be looking to make Berchelt well aware of when they share the ring.

The relentless and all-action Berchelt can’t wait to face Awuku after a number of previous opponents fell through.

“We are ready for whomever, I have prepared myself at the top, it’s good that Awuku is coming to create an upset and wants to offer a great fight to my audience. My emotions grow knowing that I will be fulfilling my dream on Saturday night,” said Berchelt.

Southpaw Awuku is in no doubt that he will shock the Mexican crowd and return home with the world championship belt around his waist.

“The Mexicans believe that they will take me by surprise and I am not prepared, they have made a big mistake, I will spoil the party for their people, I will knock out their champion and then I will go to enjoy the beautiful beaches of Cancun,” Awuku told Boxing Scene.

The challenger has genuine power in his hands, but he insists he is bringing a lot more than just that.

“I’m not just a puncher. I’m a natural and a quick counter-puncher. We Africans are brave, with a lot of professional shame. To fight for the world title and the WBC belt is a unique opportunity that will change my life and my family and I will not waste it. I want to thank everyone who intervened for me to be in Mexico to fulfil a dream,” said Awuku.

Jim McMunn, BoxNation Managing Director, said: “We are expecting this to be a real toe-to-toe affair between two fighters who don’t know how to take a back step. Miguel Berchelt had a fantastic year in 2017 and will be looking to impress once again, but we all know the rich history of Ghanaian fighters and Maxwell Awuku will be looking to carry on that proud tradition. He has the chance to win the world title and BoxNation subscribers can expect both men to give everything to ensure it is their hand which is raised at the end of the night.”