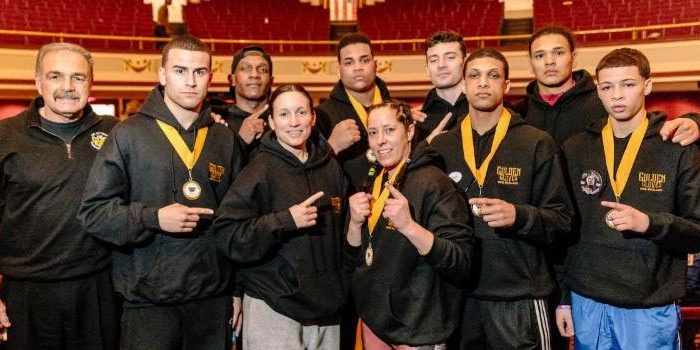 The New England Tournament of Champions, also known as the All-New England’s, is part of the 72nd annual New England Golden Gloves Championships.

Each individual N.E. champion qualified for Team New England, which will compete at the National Golden Gloves Championship, starting May 14, 2018 in Omaha, Nebraska.

“There were some great fights, hotly contested because there was so much on the line,” N. E. Executive Director Bobby Russo said. “We closed the season in grand style with great matches and a loud, packed house that’s been the Lowell tradition for 72 years. There were some disputed decisions and the crowd let everybody know how they felt after a few of the fights.

“We have a lot of talent on this year’s Team New England. It’s a strong team with some fighters who now have national experience like Angel Gonzalez, Felix Parilla, Liz Leddy, Miguel Teo and Fernely Felix, Jr. The other fighters look like they could do very well at the National Golden Gloves.”

The Rocky Marciano Memorial Award as the Most Outstanding Heavyweight Boxer was presented to Lowell, MA’s Edmond Worley, who edged Randolph, MA’s Edit McApman, 4-1, to clinch the team title for Central New England in the second to last bout of the night.

The unofficial Fight of the Night was a toss up between lightweights Jonathan DePina and Elijah Peixoto (DePina won 3-2) and middleweights Michael Fontanez and Victor Reynoso (Fontanez won 3-2).

In the most anticipated match of the evening, Mansfield, MA welterweight James Perella (SNE) defeated USA No. 5-rated and defending N.E. champion Josniel Castro (NNE), by way of a controversial 5-0 unanimous yet very closely contested decision that drew the wrath of the disapproving crown.