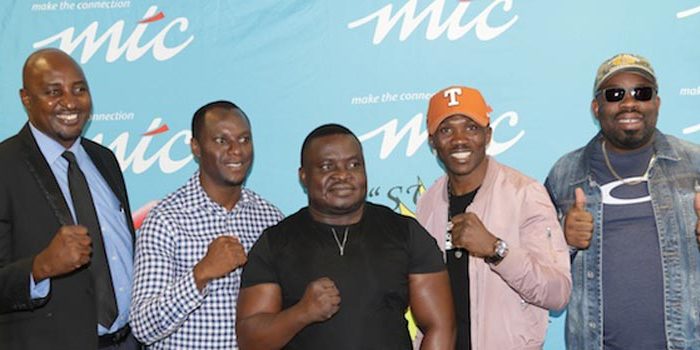 Despite losing his world title fight against Raymundo Beltran on Friday night, Paulus ‘The Hitman’ Moses was received as a champion on his return to Namibia on Monday.

At a press conference at MTC, the chief administrator of the Namibia Sport Commission, Fred Mwiya, congratulated the veteran pugilist, who vowed to continue fighting, on a great performance.

“We are delighted that you brought honour to our nation. You got respect as a great fighter, at 39 you still had the speed and the jab, and we are very happy with your performance,” he said.

He also congratulated Moses’ trainer and promoter Nestor Tobias, as well as MTC for their support of boxing.

“Thank you, Nestor – history will always remember you as the best boxing promoter that Namibia has ever produced and we also salute MTC for their support of boxing.

“I appeal to all boxing promoters to work together with the boxing board so that we can make sure that our young boxers can come through the system,” he said.

“He gave a great performance, he represented Namibia and Africa and fought like a true warrior from the Land of the Brave.

Tobias said they were well prepared for the fight.

“We prepared very well and studied Beltran so we knew his strengths and weaknesses, and we knew his left hook was a bomb.”

Tobias said a lot of people were shocked when the judges’ scorecards were announced.

“When the judges scorecards were announced the hall was very quiet. I was standing next to Bob Arum and he said it could go either way. The ring announcer Michael Buffer also told me ‘I thought your boy got him’ and Terence Crawford’s coach was also shocked. He took my Namibian flag, because he wants to put it in his gym out of respect and to mark the historic event. Everyone was shocked but we will take it like a man. Hopefully we can get a mandatory spot or a rematch,” he said.

“Paulus Moses is one of Namibia’s legendary boxers and still going strong.

Well done, you shocked the world. In the days to come we will talk and discuss the way forward for the Hitman,” he added.

Businessman Malakia Elindi who also attended the fight in Reno, Nebraska, said Moses should have won the fight.

“The crowd over there said it would be a short night. Terence Crawford couldn’t hurt Beltran and Beltran dropped Ricky Burns, but because the fight was in the UK it was a draw. Beltran received punishment and the Hitman dominated from rounds three to nine. A sport reporter at the fight told me, ‘we know The Hitman did well, but Beltran was supposed to be deported if he lost the fight, so that’s why he got the decision,’” he said.

“I want to thank MTC for their support of boxing and also Air Namibia who came in as a co-sponsor and let us fly business class. This helped a lot because it was a long journey,” he added.

When it was his turn to speak, Moses said he did his best, but had to accept the decision.

“I was ready and went out to perform and win the world title, but it didn’t happen. But that’s boxing – one must win and one must lose. Everyone was shocked – they thought that Beltran would knock me out in the first or the second round, but in the end it was not our day.

“I want to thank everyone for their support and also NBC for sharing the fight with the nation, I’m very happy,” he said.

Moses said he didn’t want to take a chance in the final rounds.

“In Round 10 I slowed down a bit, because I knew it was the championship rounds. I knew he took round 10, but I took round 11 and 12. My corner warned me to look out for a knockout punch from Beltran, so I didn’t want to exchange a lot of punches with him and that’s why I protected myself,” he said.

Regarding his future, he said he would leave it in the hands of Tobias.

“I’m still OK, my body is still fine so I’ll rest a bit and then I’ll talk to my promoter to see what’s next.”