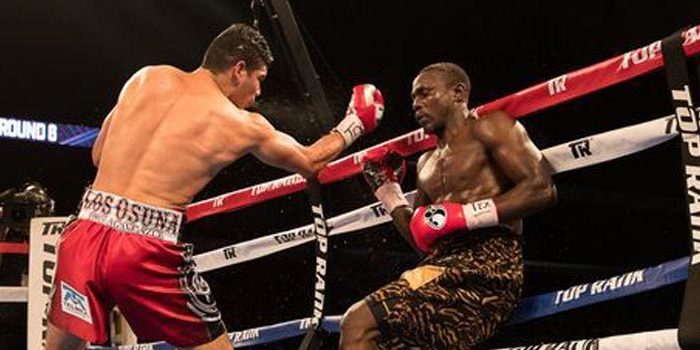 Ramirez spent five-plus rounds mostly battering his overmatched opponent before Ahmed’s trainer mercifully made referee Laurence Cole stop what had become a brutal beating in Corpus Christi, Texas. Mexico’s Ramirez (37-0, 25 KOs) didn’t drop Ahmed, but the WBO super middleweight champion hurt him numerous times to the head and the body during the final two-plus rounds in the main event of an ESPN broadcast from American Bank Center.

The official time of the stoppage was 2:31 of the sixth round.

He mostly was able to keep away from Ramirez’s power in the first two rounds, but he tried trading with Ramirez in the third round. Ramirez hit Ahmed to the head and body in that round, but also sustained a cut around his left eye in that round.

Ramirez continued to wear down Ahmed in the fourth round by hitting him to the body. The taller, stronger southpaw began the fifth round by unloading lefts to Ahmed’s head and spent the rest of it teeing off on his retreating challenger.

Unbeaten but unknown, Ahmed was an optional opponent for Ramirez. The Accra, Ghana, native is ranked No. 4 among the WBO’s super middleweight contenders.

Ahmed, who fought outside of Ghana for the first time, clearly wasn’t the most threatening opponent Ramirez could’ve fought.

In his previous four fights, Ahmed beat opponents who had a combined record of 74-49-3 entering their fights against him. In the bout before he met Ramirez, Ahmed defeated Flash Issaka (23-15, 18 KOs), a 41-year-old journeyman, by fourth-round knockout September 2 in Accra.

Despite his record, Ahmed proved to be a much easier foe for Ramirez than Jesse Hart. Ramirez dropped Hart in the second round of his previous bout, but Philadelphia’s Hart (23-1, 19 KOs) came back to make their fight very competitive.