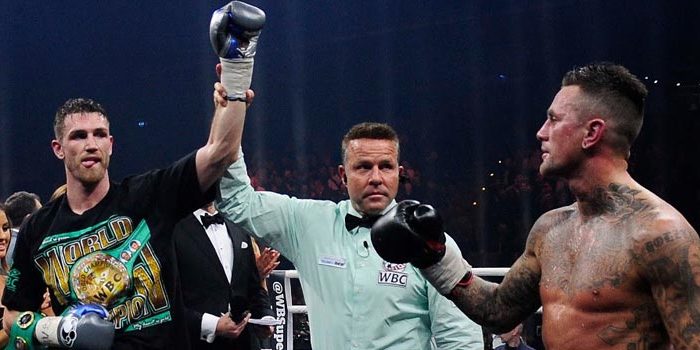 Callum Smith booked a place in the Ali Trophy Super Middleweight Final after defeating Nieky Holzken on points in Nuremberg.

The Liverpudlian was due to fight German veteran Jurgen Braehmer but he was forced to pull out early in the week due to illness.

“I’m looking forward to the final,” Smith after his win. “Groves is the one everyone wants to beat. He’s the number one seed and it’s the fight I wanted,” said tournament 2nd seed.

Said Holzken, who showcased a big fighting heart, over the 12 rounds. “I thought it would be tougher, but he did a good job behind the jab. Congratulations to him, but I will be back!”

George Groves faced off with Smith immediately after the Liverpudlian’s win.

“I’ve had two great wins, this is the fight people want to see. I need to get in the ring and win the trophy,” said Groves. “It’s exciting to see your opponent fight live – I can’t wait to get back into the gym. It will be an explosive final. I don’t expect it to go the distance – I’m confident, of course.”