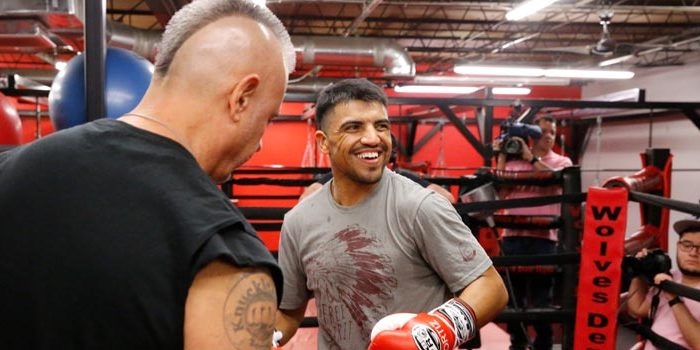 Tickets for the event, which is promoted by TGB Promotions, are on sale now and can be purchased through Ticketmaster.

Here is what the fighters had to say Wednesday from the Wolves Den Boxing Gym:

“I had a great training camp. I just made sure to listen to my coach every day and grind every day with my team. You really have to grind when people say this is your ‘last chance,’ because I’m not ready for that.

“Every fight shows a lot. Every time I step into the ring it’s a new challenge. I haven’t had any shortcuts throughout my career. I’ve never treated a fight like an easy fight.

“Life tends to take you certain places and right now I’m where I’m supposed to be. I’m 31-years-old and I believe I’m going to be able to accomplish all my goals in this sport.

“Devon Alexander is a very fast boxer who was a champion for a reason. We’ve prepared for him in each and every way possible. We’ve worked hard to be in the best condition possible. I won’t step out of the ring without that victory.

“I’ve done what I have to do to prepare for Devon Alexander. I have speed and power and that’s a scary combination for any welterweight.

“I’m thankful for the support of El Paso and I’m proud to be fighting in the main event on Saturday. We’re here to perform for everybody and have a great time.”

“I feel great right now. It’s been a tremendous training camp and I’m ready to go. I’m happy to be in El Paso to do something I love to do. Boxing is what I was born to do and I’m just ready for Saturday.

“Victor Ortiz is a good fighter. We’ve known each other for a long time. We used to fight in a lot of the same amateur tournaments. We go back a long way but this is business. We’re not friends in the ring. We’re not playing games.

“This fight is very important to me. This can catapult me back to title contention. If this doesn’t go my way, it’s very bad for my career. If I pull out the win, it could lead to tremendous opportunities for me. This is a do-or-die fight.

“I’ve added more power in this camp. But we’ve pretty much kept it typical with that emphasis on really looking good on fight night. It’s just been an all-around good camp. Victor Ortiz can’t bring something that we haven’t seen before.”

“I’m ready for this fight. A lot of boxers say they had their best camp heading into a big fight, but I truly have never had a camp this good. From sparring to conditioning, mentally and spiritually, I’m on point.

“Medina is a tough competitor. He puts it all on the line and he doesn’t quit. We’ve had problems in the past getting people to quit, but I feel we’ve figured out how to take me to that next level and get these guys out of there.

“This is a great USA vs. Mexico showdown. I’m coming to put on a show for all the fans here and watching on television.

“Everyone has a plan until they miss their first 40 punches. We both have plans, but all that matters is if you can translate that into the ring. Stylistically, I don’t think he’s fought anyone like me. It’s exciting because everyone knows what both of us are coming to do. It’s the bull versus the matador.”

“The fact that I’ve been sparring with David Benavidez in camp and have Alex Ariza around has me feeling very confident. I’m in great shape and will be ready for a great performance on fight night.

“I know that Plant likes to run and stay on the outside. Once he feels my power, I know he’s going to run even more. I’ve been making sure I’m in proper condition to chase him, cut the ring off and apply pressure.

“Everyone knows I like to fight coming forward. I’m fully confident in my abilities to get this win and earn another shot at the world title.”