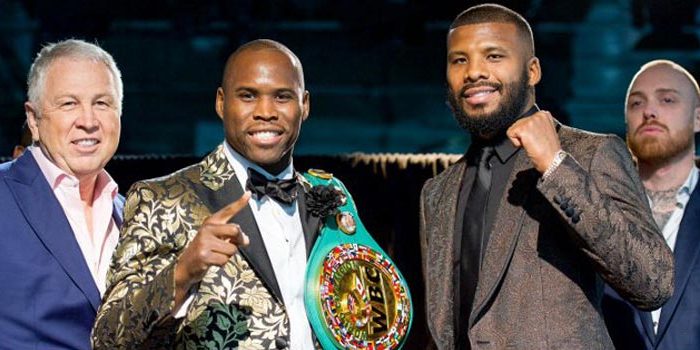 Members of the boxing media asked to weigh in on the world title showdown between light heavyweight champion Adonis Stevenson and two-division world champion Badou Jack all see a close fight on Saturday, May 19 but lean toward the challenger to take the crown from the champion live on SHOWTIME from Air Canada Centre in Toronto.

Stevenson vs. Jack is part of a split-site SHOWTIME CHAMPIONSHIP BOXING® telecast beginning at 10 p.m. ET/PT with featherweight champion Gary Russell, Jr. defending his title against mandatory title challenger Joseph Diaz from the MGM National Harbor in Maryland on Saturday, May 19.

Tickets for the live event, which is promoted by Groupe Yvon Michel, Lee Baxter Promotions and Mayweather Promotions, are on sale now and available at www.ticketmaster.ca.

Here is what the media had to say about this matchup:

Steve Simmons (Toronto Sun) – “Jack by decision – Adonis Stevenson is 40 years old and hasn’t fought in the past 11 months and has hardly been active the past two years. Look for Badou Jack to try and box Stevenson, stay away from his immense power and work his way to a 12-round decision.”

Bob Velin (USA TODAY) – “Stevenson, 11th-round TKO: Jack is the bigger man, and has a six-year age advantage, and both men have not been real active recently. But Stevenson, even at 40, is an outstanding boxer-puncher and keeps impressing. I believe he will stop Jack late.”

Lyle Fitzsimmons (Boxing Scene / CBS.com) – “I love this fight. And every time I think about the result, my mind changes.  Stevenson is certainly the puncher of the two men, while Jack seems the more dynamic all-around fighter. I can see Badou winning nearly every round based on skill and speed, but it’s harder to envision him getting through 36 full minutes without taking some solid left hands. The hunch here at this moment, though, is that he can avoid those bombs in the early going and lessen their severity as he wears Stevenson down in the second half — en route to a decision win. Call it 116-112 for Jack.”

Lester Silva (Univision) – “Although Adonis Stevenson hasn’t been tested in years, he possesses one of the best solid left hands in the sport of boxing. His hometown crowd will be on his side May 19 against Badou Jack, who is just getting off with lots of momentum after winning a title. This should be a very interesting fight only if Badou avoids getting caught with that powerful left hand.”

Adam Caparell (Complex) – “His age (40) and the questionable competition he’s fought the last five years has to catch up to Stevenson at some point, right? Not sure if I see Jack dropping Stevenson, but I’m taking ‘The Ripper’ in a majority decision.”

Josh Katzowitz (Forbes) – “Every time I think Adonis Stevenson has gotten too old or too inactive to continue to win, I’m always proven wrong. Badou Jack is Stevenson’s biggest test in the past five years, so I’m tempted to pick him to beat Stevenson. But even at 40 years old, Stevenson still has enough skills to hold on to his belt and he’s still strong enough to knock out a fighter like Jack. I’d pick Stevenson to win by late stoppage.”

John Cudney (Reddit Boxing – Sunday Puncher) – “Adonis Stevenson vs. Badou Jack is as close to 50/50 as they come.  Stevenson’s left hand is one of the deadliest punches in the sport, and Badou Jack has established himself as one of the game’s best body punchers. To add further intrigue, both men have each suffered a single loss, with each of those losses coming by first round knockout. Either man could win, and the outcome could either be an early KO or a hard-fought decision. I’m going with Badou Jack by decision. I think Jack will be able to avoid Stevenson’s left hand and make this a long and difficult night for the champion. Jack’s body punching will be the perfect weapon to make Stevenson finally feel his age in the ring.”

Rhett Butler (The Shadow League) – “This is honestly a fight for true fight fans who understand the pivotal and unique David vs. Goliath matchup that this truly is. Adonis Stevenson has an illustrious array of light heavyweight bodies on his resume and is a true juggernaut in the division. Still, Jack earned a world title in his first jaunt at light heavyweight and as the old adage goes, ‘true champions can do it in multiple weight classes’. Both Stevenson and Jack are hungry but I think that Jack will fell the giant in Stevenson this time out. It’s his time and Stevenson thinks since Andre Ward retired he might be safe from anyone not named Kovalev. It will be a war of attrition, that ultimately Badou Jack will have his hand raised from.”

Gabe Oppenheim (Props) – “I pick Jack by decision, though a late stoppage wouldn’t surprise me.”

Gilbert Manzano (Las Vegas Review Journal) – “In a really close fight, I say Badou Jack pulls it out. Very close, split decision for Jack. I think the fans will witness a couple knockdowns too.”

Andreas Hale (Ring Magazine) – “Close fight! Adonis Stevenson’s age might finally catch up to him and he might be underestimating Badou Jack. We might be in for a little barn burner in the middle of the rounds. I’m gonna say Jack by split decision.”

Salvador Rodriguez (ESPN Deportes) – “It’s not an easy fight for anyone. Adonis Stevenson is 40 years old and Jack showed some very good things in his first fight at 175 with the KO over Nathan Cleverly last year. I believe Stevenson has something in his pocket, but not enough to defeat a younger lion like Badou Jack. I go for Jack by points.”