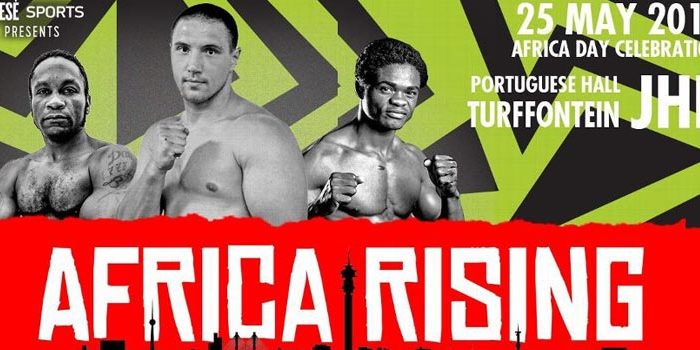 May 25 is Africa Day, which is the perfect timing for Kalakoda Promotions and Kwesé Sports’ next installment of the Friday Fight Night series, aptly titled ‘Africa Rising’.

The event takes place at the Portuguese Hall in Turffontein in Johannesburg and forms part of a three-day boxing convention of Southern African states.

The inaugural convention will seek to foster strong inter-country relations amongst the various boards, and cover a full spectrum of topics around boxing administration and good governance.

“We are very honoured to be part of this great occasion and working alongside Boxing South Africa to co-host this event. Sport and boxing has no borders and this convention is a fantastic step to galvanise Pan-African boxing,” Kalakoda’s Jeremy Bean says.

The event will be themed as a celebration of Southern African boxing and the fight bill provides representation from across the SADC region.

Felesianu is building up to an IBF Intercontinental fight on August 3 in Swakopmund in Namibia, and this contest will provide the perfect warm-up.

Special mention must also be given to Vlad Sirenko, the Ukraine Heavyweight prospect who has made South Africa his home. He takes on Malawi’s Alick Gogodo in a non-title heavyweight bout.

The remaining card promises some great match-ups and representation from some ten Southern African countries, including two ladies bouts.

The event will be broadcast live across the continent on Kwesé Free Sports, as well as Soweto TV Channel 251, OVHD and streamed across Africa on Facebook Live.