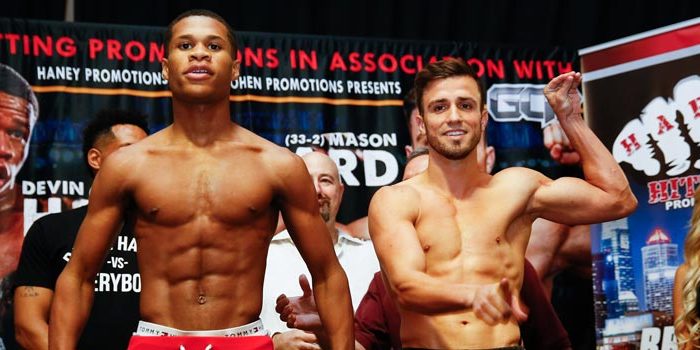 PHILADELPHIA (May 10, 2018) – Undefeated lightweight prospect Devin Haney and veteran Mason Menard made weight on Thursday for their 10-round main event matchup tomorrow/Friday on ShoBox: The New Generation live on SHOWTIME® (10 p.m. ET/PT) from 2300 Arena in Philadelphia, PA.

Haney (19-0, 12 KOs), a seven-time junior amateur champion, is a highly-touted prospect from Las Vegas taking a major step-up in opposition against Menard (33-2, 24 KOs), whose only loss in nearly a decade came to current WBO Lightweight Champion Ray Beltran. Menard, who will appear on ShoBox for the third time on Friday, debuted on the series in 2016 in dramatic fashion when he brutally knocked out the previously unbeaten Eudy Bernardo.

Super bantamweight prospects Josh “Don’t Blink” Greer (16-1-1, 8 KOs) and Glenn Dezurn (9-1-1, 6 KOs) nearly came to blows at Thursday’s weigh-in before they meet in the 10-round co-feature. Greer returns to ShoBox for the third time after scoring knockouts in his previous two appearances. The once-beaten Dezurn, who fights out of Baltimore, also returns to the series for the third time. Light heavyweight prospects Alvin Varmall Jr. (15-0-1, 12 KOs) and Charles Foster (15-0, 8 KOs) face their toughest opponents to date in an eight-round featured attraction.

In the opening bout of the telecast, undefeated super bantamweight Arnold Khegai (11-0-1, 8 KOs) meets veteran Adam Lopez (16-2-2, 8 KOs) in an eight-round bout, which will be Lopez’s record-setting seventh ShoBox appearance.

Tickets for the event, which is promoted by Greg Cohen Promotions, Devin Haney Promotions & Hard Hitting Promotions, are priced at $125 for VIP, $75 for ringside and $50 for general admission and are available at the 2300 Arena Box office or online at www.HardHittingPromotions.com

(See attached for a full bout sheet, including non-televised fights.)

“A lot of top prospects have been turning me down and Mason Menard was the guy that stepped up and took the fight.  He’s the only guy that wanted to fight me.

“I need to take care of business tomorrow and hopefully I get a title eliminator next.  The belts are tied up at 135 and the way my weight cutting s going I could make 130.  So if given the right opportunity I could go for a title at 130.”

“My only real loss was to a current world champion.  He’s stepping into a whole different world and that’s going to be the difference.  We want to see Devin in deep waters because we know he hasn’t been there before.

“A win here will catapult me back into the top contender ratings.  We have a lot of confidence, the shoulder has healed well.  It’s been smooth sailing in camp and we’re ready to go.

“Getting out of Louisiana has made a huge difference.  Training in Dallas and Los Angeles I’ve gotten the best work of my career.  For the (Ray) Beltran fight I had one sparring partner.  I’ve had plenty of sparring partners for this fight.”

“This opportunity against Dezurn, I couldn’t turn it down.  So when they offered it I said, ‘let’s go.’

“He’s an average fighter.  There’s nothing that impresses me.  He’s in great physical shape and he’s going to be there for three or four rounds, but after that it will be a problem.   As soon as I see him fade I’m going to step up my game and take him out.

“A win here could set me up for great things.  I’d love to get in the new World Boxing Super Series.

“When I first started boxing I was facing tough competition.  I had to find myself and now I found myself.  The better the fighter the better I’m going to look.

“It’s easier for me to focus training outside of Chicago.  That’s why we made the trainer switch. I can focus on boxing and sharpening my game.  I’m in California sparring so I’ve sparred with some of the best guys.  I’ve sparred with Olympians.  I’m ready for any and everything.”

“He brings a pillow to the ring and we’re going to give him a blanket.  If I’m afraid of a pillow I’m in the wrong business.  But that’s what he’s supposed to do to make this exciting.

“I want to be a nightmare for him.  At the end of the day, I want him to think twice about bringing that pillow to the ring again.

“My job is to have good hands and be victorious.  He’s young and he’s flamboyant and he’s going to make me look good when I beat him.  When he talks it just gives me more motivation.”

“This weight has been perfect for me.  I’m taking my career very seriously now.  I’ve been sparring with some good guys, getting good work in the gym.  I’m ready for the move down to 175 and maybe 168 next.

“I’ve watched a little bit of tape on him but not too much.  I’m worrying about myself, I’m not worrying about him.  I’ve fought taller guys than him so I’m not too concerned with that.

“He’s definitely a step up, but it’s a step up for both of us.  It’s his birthday and I owe him a present.  We’re going to continue to work hard and shock the world.”

“It’s a brawler vs boxer type fight.  He’s going to be the shortest guy that I’ve fought.  We know he’s going to try to come in and fight and we’re going to be ready.

“He looks good on paper, he’s undefeated.  So this is a good test for us.  Tomorrow we’ll see who is the better guy.”

“I’m ready to make my statement here in the U.S.  I’ve fought a lot of fighters with good records and now I’m here to show the fans in America.  My vision was to always fight in America and now it’s here.

“Ukrainian fighters are making a lot of moves in the U.S. and now it’s my time.  This is where boxing lives.  The future is here.

“This fight is very important.  I’m no stranger to fighting undefeated guys.  This is the fight that will gauge where I’m at right now.  I feel like I’m close to getting where I need to be.

“I’ve seen all of his fights before.  He’s a tough guy, so we need to beat him with a variety of punches.”