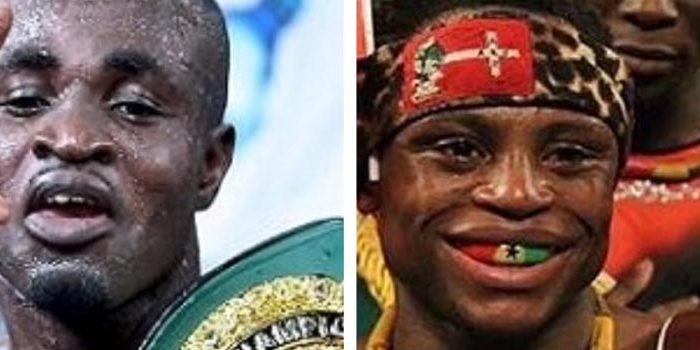 It’s a question that’s been raised considering recent events. Tagoe is the ninth-ranked lightweight on Boxrec.com. The 29-year-old southpaw is a smooth operator in the ring, blessed with fast hands, decent pop and solid footwork.

Clearly, Tagoe is an excellent boxer. However, what he’s not is a world champion.

“Isaac Dogboe, whose star has finally arisen, becomes the ninth Ghanaian to win a world title… The entire boxing family in Ghana is very much elated for getting a new champion after IBO lightweight champ Emmanuel Tagoe.”

As a board member of the Transnational Rankings Board, this writer would be remiss without stating that there are far too many title belts today. As it stands, the four major sanctioning bodies recognized by international boxing authorities are the World Boxing Association (WBA), the World Boxing Council (WBC), the International Boxing Federation (IBF) and the World Boxing Organization (WBO).

Any world title outside of these four is considered a minor belt. The IBO is not recognized among those four.

Some will point to Anthony Joshua, Roy Jones Jr. and others who have held the IBO trinket at one time or another as proof of the belt’s legitimacy. Those same people overlook the fact that Joshua and co. held recognized true world titles at the same time they held the IBO. A cubic zirconia placed alongside a diamond may resemble a diamond, but it’s still a cubic zirconia.

It’s natural for boxers to flaunt their belts, even minor or meaningless ones. But a boxer does not determine what is considered a legitimate title. Shall we then recognize the WBF world title if one of its titleholders demands it? Most would disagree.

Tagoe is, understandably, feeling the heat of what the 23-year-old Dogboe has accomplished. Prior to the Dogboe-Jessie Magdaleno bout, he told UTV, “If Dogboe wins, he won’t fight me, so I’m praying he loses so that when he comes, he’ll face me.”

The unusual statement was an admittance that Dogboe is already on a higher plane. And that only a loss can bring him down to Tagoe’s level.

Tagoe continues to call him out although Dogboe fights three divisions below him. This is unheard of. But weight isn’t the only difference between the two.

Dogboe stopped an undefeated, 27-year-old world champion to become one himself. And he did it on enemy soil, fighting on a card put together by Top Rank Promotions, Magdaleno’s promoter.

Tagoe won a unanimous decision over 43-year-old Mzonke Fana to win a vacant IBO title. South Africa’s Fana had lost three of his last seven fights, including the one prior. The match took place in Accra under the patronage of Baby Jet Promotions, Tagoe’s promoter.

Tagoe could have redeemed himself by taking on a viable contender after Fana. According to Boxrec.com, Fernando David Saucedo, his subsequent opponent, was the 90th best fighter at lightweight.

Tagoe wasn’t forced to face the lowly-ranked Saucedo. Argenis Mendez, a legitimate contender and the former IBF world featherweight champion, was the original opponent. The bout was delayed several times by a Tagoe injury which he refused to disclose. After sidelining Mendez for six months, a fully-healed Tagoe opted to fight Saucedo instead.

BoxingAfrica.com has been accused of being too harsh on “Game Boy.” Some say we should uplift our African brother. But the one to be uplifted must first be willing to reach higher heights.

Isaac Dogboe traveled halfway across the world to bring a championship home. Richard Commey is a fight or two away from bringing Ghana another world title. Duke Micah and Fredrick Lawson aren’t far behind.

These boxers battle abroad to prove themselves on a global level. We can all recall the Biblical story of the man who left talents for each of his five servants. All but one went out to trade their talents for more. The last servant dug into the ground and kept his talent hidden there.

Indeed, the greatest risk in life is not taking one. Thus, it’s clear why Ghana does not recognize Emmanuel Tagoe as a world champion: Because neither does the rest of the world.