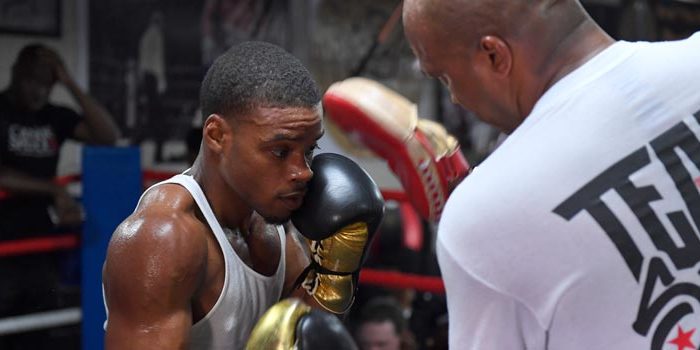 Unbeaten welterweight world champion Errol Spence Jr. hosted a media workout at his gym in Dallas Tuesday as he prepares for his homecoming title defense at Dallas Cowboys Headquarters against undefeated challenger Carlo Ocampo Saturday, June 16 live on SHOWTIME from Ford Center at The Star in Frisco, Texas in an event presented by Premier Boxing Champions.

The IBF titleholder spoked to media at the R&R Boxing Club along with trainer Derrick James, as the two prepare for Spence’s second title defense after winning the title from then unbeaten champion Kell Brook last May.

Tickets for the event, which is promoted by TGB Promotions in association with Man Down Promotions, are on sale now and can be purchased at www.SeatGeek.com.

Here is what Spence and James had to say Tuesday:

ERROL SPENCE JR.
“It feels good to be fighting back at home in Dallas. This is where I started and where my core fan base is. It’s great to fight in front of my people and even better that I can do it as a world champion now.

“I wanted to make my first title defense in Dallas, but everything happens for a reason and now I have this great opportunity to fight at the Dallas Cowboys’ facility. It’s an incredible venue that has everything you would want. It’s going to be a great atmosphere on June 16.

“We’re working hard on our game plan and sharpening our skills in camp to make sure I’m the best version of myself when I step into the ring against Ocampo.

“Timing is key in boxing. It’s more important than speed and it’s something I really focus on when I’m training. It’s timing and accuracy. You can be fast but if you don’t land, it doesn’t mean anything.

“I’m a versatile fighter who is able to switch it up. I can box from the outside but also go on the inside. These are things that we’re always working on in the gym. Our opponent may bring something different than we expected into the ring, so we work on having a plan for everything.

“It’s great to have another world champion like Jermell Charlo in camp with me. Iron sharpens iron and we just work hard every day so that we can push each other to the next level. All of that helps me become victorious.

“I wouldn’t say I have one skill that sticks out the most in my arsenal. I’m a balanced boxer who can do everything. I can jab, throw a combo and show strong defense. I balance all of the attributes you need in the ring and that’s what makes me a great boxer.

“I’ve been putting this division on notice for a while. June 16 is another day that we’re going to give another one-sided performance and dominate. I’ve had the welterweight division on notice since my first fight. They know I’m here.

“Whoever wins the fight between Danny Garcia and Shawn Porter for the WBC title will have to fight me. I’m ready to unify. I’m ready to take the belt from either one of those guys.”

DERRICK JAMES, Spence’s Trainer
“Errol is an incredibly hard worker in the gym and he always has been. We’re just making sure he’s on task and able to be peaking on June 16. I have no worries that he’s going to be distracted by fighting at home.

“There can definitely be a lot of distractions at home, but Errol is determined and I know he has the mentality that will allow him to put on his best performance. We’ve been preparing for anything Ocampo could possibly bring to the ring.

“I’m excited that my two daughters will be able to come to the fight. This night is all about our community and giving everyone here something to cheer about. The city has indicated that they’re really coming out to support Errol and he’s going to reward them.

“If we keep putting in the work like we have been, everything is going to come naturally on fight night. We’ve taken a look at what Ocampo likes to do and we’ll be ready. At the end of the day, I think Errol is going to put on a great performance for this city.”