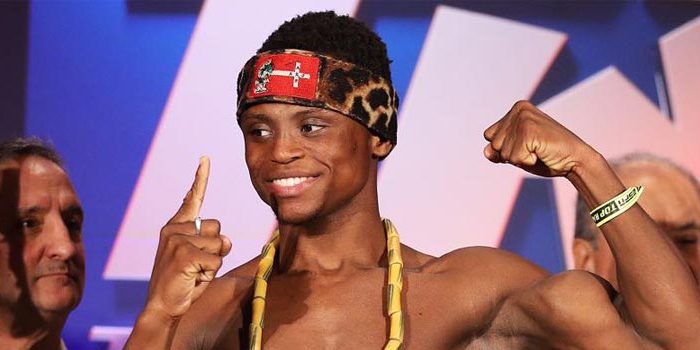 New WBO world super bantamweight champion Isaac Dogboe is still getting used to his newfound fame, after beating Jessie Magdaleno to claim the Super Bantamweight belt, but the Ghanaian is aiming for bigger bouts as early as August.

Three weeks after defeating Magdaleno in Philadelphia via TKO to become Ghana’s youngest boxing world champion, the 23-year-old is getting his head back in the ring, naming the likes of Rey Vargas and Daniel Roman as potential opponents.

The undefeated Dogboe (19-0), along with his ever-present father-slash-coach Paul, has set his sights on unifying the division and becoming the undisputed Super Bantamweight champ.

“At the moment, after my discussion with Top Rank, what my father made me understand it that in August I may go out in the ring again,” Dogboe tells KweséESPN.

“Afterwards we will be looking forward to unify the division, fight other world champions in the division and then from there we will see what is next.

“I would want to fight WBC champion Rey Vargas because he avoided me a while back… and there’s Ryosuke Iwasa of Japan, he is the IBF champion, plus Daniel Roman, he is the WBA champion. These are the guys on the hit list.”

Should Magdaleno be interested in a rematch, after the Ghanaian knocked him out in 11 rounds on 28 April, Dogboe says he would be up for it, and would defend his title with ease.

“I mean, if he wants a rematch it will be great because if he couldn’t beat me the first time there’s no way he can beat me the second time,” Dogboe says.

“I wouldn’t have to think about what’s coming at me because we already figured out his weaknesses, we found out everything that we need to know about him so I think in that time it will even be a quicker knockout than the previous.”

Dogboe had hoped his fight against Magdaleno, which was live on ESPN, would significantly aid his introduction to American boxing fans. He feels he achieved just that.

The boxer, referring to Top Rank promoter Bob Arum’s comments after the fight, said with typical fighter bravado: “Bob Arum said I am something special, I’m like a diamond, a gem.

“I believe that those boxing fans and followers in America know who Isaac Dogboe is.

“We came to Ghana, we destroyed everyone here, we’ve conquered the whole of Africa, Europe, America. Right now we are a big name in America, they say if want to be the best you have to be in America and I proved I can do it there.

“At this moment I believe that I’m one of the biggest names in world boxing in terms of the Super Bantamweight division.”

Ghana’s greatest boxer, Azumah Nelson, has suggested Dogboe could go all the way and become a boxing legend. Dogboe’s father had claimed before the fight, “We are going to see Azumah reborn.”

His son is not sure of that yet: “I’ve seen Azumah Nelson fight. He is a legend who opened the gateway for us to emulate and to build upon so it’s a big shoe to fill.

“We have to understand that to get to Azumah Nelson’s level it takes a lot. The man reigned for a decade or more.I’m just a newly crowned champion so let’s see where God leads me.”