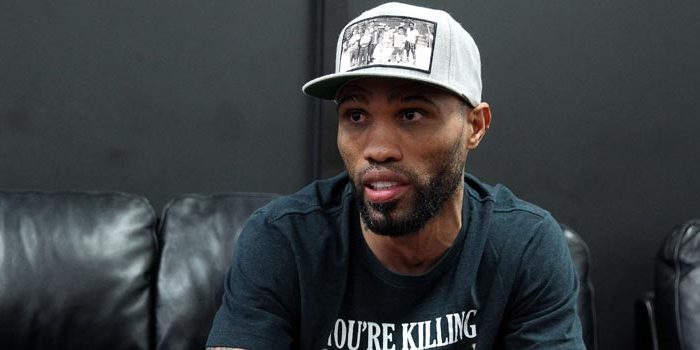 Tickets for the event, which is being promoted by Mayweather Promotions, begin at $25, are on sale now and will be available at http://www.samstownlv.com/entertain.

Here is what the participants had to say Wednesday:

“I’ve been in there with some great fighters throughout the year. My mentality is that no fighter is going to beat me who’s been stopped every time he’s stepped up. I have to do whatever I can to make sure that happens.

“This is the first time in my career that I’ve had a strength and conditioning coach for two fights in a row. I feel really good right now. I hate clichés and I hate saying this is the best camp of my life, but I really do feel like this is one of the best camps I’ve had. I felt like that last fight too, but I know I’ll sound like everybody else

“What motivates me is watching guys like LeBron James who have been doing this nearly as long as I have, and they’re still at the top of their game. That kind of longevity is what I strive for and that’s because I live that life inside and outside of the gym.

“I’ve been training for three months for this fight and I just want a fair shake on fight night. I thought the scorecards in the Julian Williams fight were terrible. I can’t control it but it’s definitely something I want to avoid on fight night.

“Nobody has put on for Las Vegas like I have. I’ve done everything in my career the hard way. I took Cornelius Bundrage’s belt in his hometown. I’m not going to be beat on Friday night.

“I’ve been in this game two decades and I’ve seen the highs and the lows. If everything works out, I’ll be victorious on Friday night. I’m ready to go on the road and take on anyone.”

“Every time I step into the ring I’m extremely motivated. I’m fighting to feed my family. I’m from Detroit so we go through wars all the time. I was ready to jump on this fight as soon as they asked me about it.

“This is a fight that will get me back to a world title fight. This can get me right back into a title eliminator. What better place to do it than the boxing capital of the world? Everybody who fights wants to be in the main event fighting in Las Vegas.

“Ishe Smith has been in a lot of tough fights and he’s fought most of the top guys in the division. If I can get him into some danger, I want to see how his will is at that moment. I’m going to push him from round one and I think it makes for a good fight.

“It’s part of my mental game to make him work round after round. If I see him slow down, it will make me push more. I appreciate what he’s done, but I don’t know how much more he has left. I want to be a champion like he was.

“Being the first person to stop Ishe would be an opportunity I have to take. It would make a statement. But if I go the distance, it would answer all of the questions the critics have had about my motor. I’m going to be fresh until the end of this fight.”

“I’m excited to put on a good show and take care of a solid durable opponent. I know that my time is coming and this another chance to show off my skills.

“Once I fight the top tier cruiserweights, they’re going to see what I’m capable of. I basically used Steve Cunningham’s game plan against him. I’m very adaptable.

“I’m focused on showing a versatile side of my boxing skills. I’m not going straight for the knockout. I want to show people that I have boxing IQ and the ability to knock anyone out in the ring. I want to show both sides of my skill set.”

“It’s always important to have great fights like this to Las Vegas. With Ishe Smith being a native it’s even better. This is a good fight that could put Ishe back into the thick of things. People don’t raise their hand to fight Ishe. I think Ishe has a second wind right now and he’s refreshed at this point in his career.

“Ishe doesn’t fight like he’s 39. There isn’t going to be anything that Tony Harrison can bring that Ishe hasn’t seen. Ishe has picked it up and I think the rest of the division knows that. It’s a deep weight class with a lot of possibilities out there. He has the ability to beat anyone out there.

“The future is very bright for Andrew TAbiti. It’s all in his hands. He has all the attributes that you need. He has a good team around him and it’s just a matter of finding ways to help him get to the next level. This is a great opportunity for him to showcase his skills against a very durable, tough guy in Kayode. Tabiti is looking to make a statement to all the other cruiserweights out there. He’s a guy they’re going to have to deal with in the very near future.”

Premier Boxing Champions on Bounce will also be available to be streamed live via Bounce’s new subscription-video-on-demand service Brown Sugar, which features an extensive and one-of-a-kind library of iconic black movies as well as Bounce original programming and series. Brown Sugar is available on Apple TV, Roku, Amazon Channels, Amazon Fire TV, Amazon Kindle, Android and Apple smartphones and tablets and web browsers via BrownSugar.com. Brown Sugar also has Google Chromecast capabilities which allow video to play on televisions directly from mobile devices and tablets for consumers with Android and iOS devices. There is a free initial trial period for subscribers with a retail price of $3.99/month thereafter.

Bounce (@bouncetv) is the fastest-growing African-American network on television and airs on the broadcast signals of local television stations and corresponding cable carriage. The network features a programming mix of original and off-network series, theatrical motion pictures, specials, live sports and more. Bounce has grown to be available in 99 million homes across the United States and 95% of all African-American television homes. Visit BounceTV.com for more information.