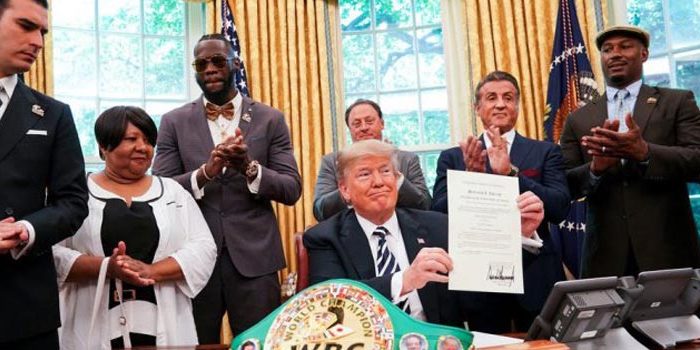 Johnson, the first black man to win boxing’s heavyweight championship, fled the United States after he was charged in 1912, during his title reign. He eventually served almost a year in prison for what’s widely viewed as a racially motivated conviction.

Senator John McCain, former Senate Majority Leader Harry Reid and filmmaker Ken Burns led the group of people that began pushing for Johnson’s posthumous pardon in July 2004. Trump mentioned in April that he would consider pardoning Johnson once actor Sylvester Stallone called him about this issue.

“It’s my honor to do it,” Trump said Thursday during a ceremony in the Oval Office. “It’s about time.”

TRUMP to LENNOX LEWIS: "So Lennox, if I really started working out, could I take [current heavyweight champion] Deontay [Wilder] in a fight?"

LENNOX: "You have to get past those long arms." pic.twitter.com/k2vmAcXhjr

The U.S. Department of Justice began investigating Johnson when the Mann Act was passed in 1910. The act banned the transportation of women in interstate or foreign commerce “for the purpose of prostitution, debauchery or for any other immoral purpose.”

The mother of Lucille Cameron, a woman with whom Johnson was involved, accused him of kidnapping her daughter in October 2012. Cameron wouldn’t cooperate with authorities and later became the second of three white women to marry Johnson.

A prostitute with whom Johnson had been involved, Belle Schreiber, did work with the Justice Department soon thereafter. That led to Johnson being convicted by an all-white jury in May 1913 and getting sentenced to one year and one day in jail.

Johnson appealed the conviction and fled the United States to continue boxing overseas. He lost his world heavyweight title in April 1915, when Jess Willard knocked him out in the 26th round of their fight in Havana, Cuba.

Upon his return to the United States in 1920, Johnson served roughly 10 months in a Leavenworth, Kansas, prison.

Johnson retired with a career record of 73-13-10, including 40 knockouts and five no-contests. He boxed professionally until September 1938, when he was 60 years old.

Johnson was inducted into the International Boxing Hall of Fame in 1990.