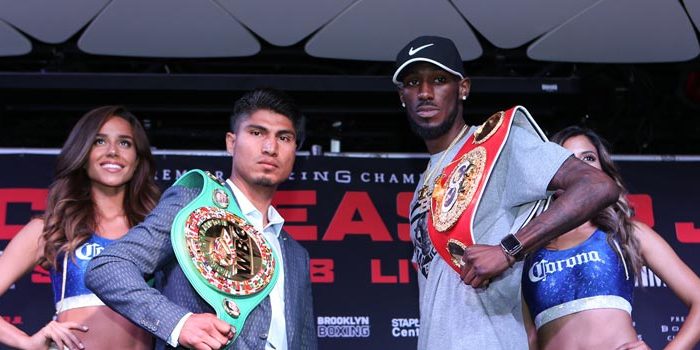 Tickets for the live event, which is promoted by Ringstar Sports and TGB Promotions, begin at $50, plus applicable fees, and are on sale now. To purchase tickets, visit AXS.com.

Here is what the press conference participants had to say Thursday from Conga Room at L.A. Live:

“This will be my first title unification match. It means a lot to face another unbeaten champion. It will help my legacy and my career. I’m taking the proper steps to move forward and cement my name for the ages.

“There isn’t another fight in front of me right now that gets me excited other than this one against Robert Easter Jr. He’s going to come with everything he has. This is definitely his biggest fight and I believe we’ll be able to bring the best out of each other.

“I’m very happy to be fighting again in Los Angeles. It’s been seven years since I fought here. To give fans a chance to see this big fight live at STAPLES Center is a great thing. I’m very thankful that we could have the fight here. Most opponents wouldn’t have come here.

“I’m coming back to STAPLES Center as a world champion and I have a chance to unify in my hometown. There’s nothing better that I could ask for. I’m going to do everything I can to come out victorious on Saturday night.

“I’m glad that Robert is confident coming into this fight. I believe that he will show up the best possible version of himself. That’s what gets me even more motivated and excited for this fight.

“I’m here to take the biggest fights and biggest challenges. I will be at welterweight very soon and I look forward to taking on the best there. Everyone says not to do it, and that’s what excites me and motivates me the most.”

“I really don’t pay attention to being ‘overlooked’ or what my opponents say leading up to a fight. On July 28 we still have to get in there and throw these hands. Nothing said by him or anyone outside bothers me at all.

“The only big name Mikey Garcia has beaten is Adrien Broner. I’m going to give him problems. I believe with our skills and record, the winner of this fight is the best fighter in the weight class.

“This can add big attention to my career. It can help me get the recognition that I deserve. I look at all my fights like a big fight, but obviously this is unification. You will see two warriors in there on Saturday.

“It’s been a long time since I made my pro debut at STAPLES Center. You’re going to get a lot of action and excitement on Saturday night. Expect the unexpected.

“I had such a great training camp with coach Cunningham and my dad. It was all boxing all the time and really what I needed heading into a matchup like this.

“Everyone will be able to see my hard work pay off on Saturday night. I’m not the one who likes to talk about it, I want to show everybody what I got.

“These are the kind of fights that I’ve always wanted to be a part of. It’s a big fight that I know the fans are going to really enjoy. I’m going to give them something to remember.

“Being the underdog is what it is. Only one of us can be the favorite. We did what we had to do to prepare for this fight and on July 28 you’ll see it all in action.”

“There’s always risk in any fight. We’re very well-prepared for this big challenge and Mikey is in a great place mentally. Easter is a tall guy who I’m sure will try to use his reach and fight from the outside. But we’ll be ready for whatever he brings.

“This is obviously a big fight for Mikey against another elite boxer. When two undefeated guys are unifying, it’s always big. We had great sparring partners who prepared Mikey to be at his very best.

“We’re ready for the best Robert Easter possible. I’m not even looking at his past two performances. We’ve done what we had to do to be ready for this fight and the best version of our opponent.”

“Robert has always been a tremendous fighter and an excellent boxer when he wants to box. We just put extra emphasis on how we want to fight Mikey Garcia. Robert has the natural skill and ability, plus the size and reach to get this done.

“We’re prepared to dictate the tempo, control distance and range and do everything we want to do. We’ve done it so far in camp and we’re going to bring it into the ring on Saturday night.

“It’s obvious for the last couple of weeks that Garcia has been talking more about future fights than this fight on Saturday night. I look at that as him overlooking Easter. However, Mikey is a pro with a seasoned trainer so I doubt he’s being totally overlooked. He better be ready.”

“I always feel very confident about Robert’s chances every time he steps into the ring. We had a good camp and I know he’s ready. He’s always ready, just like he’s been for every fight leading up to this one.

“This fight is going to live up to the hype. Robert is going to go out there and show the world what he is really made of.

“We’re going to go out there and get the win. We’re going to impose our game plan on Mikey and make it a really long night for him.”

“My hunger and motivation to become world champion has not changed at all. My opponent is very big, but in the ring everyone is the same size. We’re going to be smart and I’m going to do my job on Saturday night.

“The Wilder fight is what it is. It’s the past now, and I don’t regret it. At the end of the day I want the rematch and I believe I deserve the rematch. They’re still running from me and they’re obviously running from Wilder, but I’m running from no one.

“A victory on Saturday night will put me back in line for the rematch with Deontay Wilder. Fighting is what I know how to do, and that’s what I’m coming to do on Saturday night. We’re both hungry for a win and we will see who comes out on top.

“I learned that I need to train even harder, fight harder, throw more and connect more. If I hadn’t been fatigued, I’d still be punching him today. I threw the clock away at the gym. We’re going to be smarter going forward.”

“I am very ready for this matchup. When we got this call, I was already in shape. We just had to make the adjustment to fighting a southpaw. We have about a month of really fun sparring leading up to this fight.

“I feel very comfortable against the southpaw, especially one that everyone is familiar with like Ortiz. I know I have the skills to take home the victory.

“The Wilder vs. Ortiz fight was a great fight and I congratulate him for that performance. I saw plenty of things that I can expose. The main thing is the sharp one-two combination that gives him trouble.”

“This is definitely the toughest test of my career. I’m very happy to have this big fight. This is going to be the breakout performance that I’ve been looking for.

“Whichever title is available to me is the title we’ll go after. It doesn’t matter who I have to face, I’ll be ready. I’m gunning for the very best.

“This is a great opportunity to make my debut on SHOWTIME. This is a card packed with talent, but I plan on stealing the show. I’m going to show everyone the kind of fighter that I am.

“Barrios’ best weapon would be his speed and his range and I think we have the perfect game plan to oppose it. I know that I have to be patient in there because I have a difficult opponent. I’m doing this for my family and no one can stop me.

“A win over Mario Barrios would be huge for me. The fans can come in there expecting a war between two Mexican warriors who will leave it all in the ring.

“When I’m not fighting I’m going to Cyprus College and majoring in Mathematics. I’ve been really good at math since I was a kid. I’m on a great track right now in my boxing career and in life.”

“This is a top to bottom amazing card. It’s a boxing spectacular taking place here at STAPLES Center. We have a little bit of everything on this card. That includes talent from Robert Garcia’s gym, plus 2016 U.S. Olympian Karlos Balderas, who I believe will one day be headlining at STAPLES Center one day.

“The televised portion of this card has a stellar lineup as well, including an undefeated Mario Barrios, who represents Texas well and makes his state proud. He’s one of the most exciting fighters in the division and will have a tough challenge in Jose Roman.

“Luis Ortiz is the kind of fighter that you just don’t want to miss a minute of when he fights. He is coming off of one of the best fights of this year, when he challenged WBC heavyweight champion Deontay Wilder.

“The matchup between Mikey Garcia and Robert Easter Jr. is the cherry on top of an amazing night. I know that these fighters are ready to entertain and showcase their talent.”

“Mikey is a top pound-for-pound fighter and Easter is the longest reigning champion at lightweight and probably the most avoided fighter in the division. No one is rushing to fight either of these guys, yet, this was an easy fight to make.”