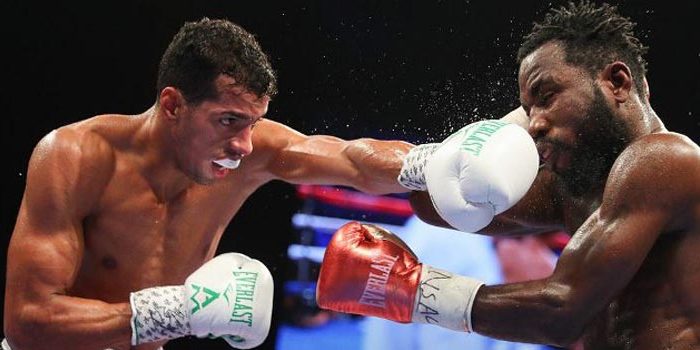 Ghana’s Rafael Mensah showed plenty of heart but little else as he was outclassed by Alberto Machado, who retained his WBA world super featherweight title via 12-round unanimous decision.

Mensah, now 31-1 (23 KOs), entered the fight with an undefeated tally, but only 12 of those opponents had winning records and none of them were ranked by any sanctioning body. This was his first fight outside of Ghana. The inexperience showed as he averaged 7.5 punches landed per round.

Machado won every round on all three cards (120-107). Making the first defense of his title, Machado nearly ended affairs in the first, dropping Mensah with a beautiful right hook with only seconds left in the round.

.@xplosivomachado floors Mensah with a brilliant right hook towards the end of Round 1. #MachadoMensah pic.twitter.com/RIpyOo19u2

Mensah beat the count but was never in the fight. Machado rocked him again in the fourth, this time with the left hand. The Puerto Rican southpaw had his way during the first half of the bout, seemingly landing at well.

Mensah withstood a beating but couldn’t mete out his own punishment. However, Machado began showing signs of fatigue in the seventh, his punch output slowing down. Mensah’s face was a swollen mess by then. Ringsiders at the Hard Rock Hotel & Casino in Las Vegas began screaming at referee Tony Weeks to stop the fight during the ninth when another left drove Mensah back again. But Machado took his foot off the gas, comfortably cruising to a shutout victory.

Mungia, 30-0 (25 KOs), was heavily hyped following his shocking KO over Sadam Ali, but this performance will bring that down to earth a bit. The hard-hitter proved easy to hit himself and needs far more seasoning before tangling with the likes of WBA/IBF world champion Jarrett Hurd and WBC world champion Jermell Charlo.

Smith enjoyed plenty of success over the first four rounds, repeatedly landing his overhand right. But the Englishman isn’t the hardest of punchers and was unable to keep Munguia off him. A left hook in the sixth, dropped him hard. The tenor of the bout changed after that, with Munguia getting off first with the cleaner harder punches.