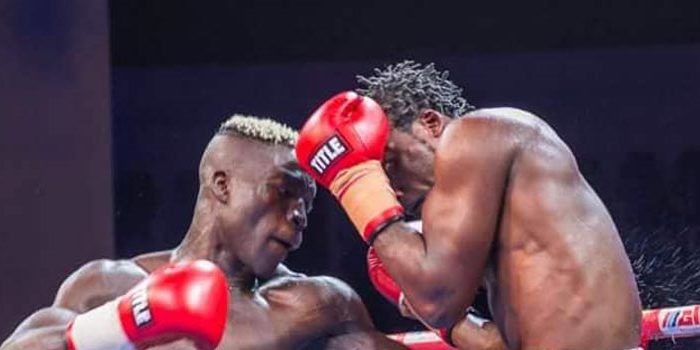 ACCRA—With card promoter Azumah Nelson sitting ringside on his 60th birthday, Sheriff Quaye reminded those in attendance at Bukom Boxing Arena of how “The Professor” dealt with rematches.

In November 2016, Quaye eked by Benjamin Lamptey via 12-round split decision at this same venue. Saturday night was a far different story as Quaye controlled the action from the opening bell, breaking Lamptey down to score a seventh-round KO and claim the vacant National lightweight belt.

According to GhanaCrusader.com reporter Daniel David Quartey, Quaye controlled the action during the first three rounds, backing Lamptey up behind a ramrod jab. Lamptey found his footing in the fourth, catching Quaye with a right cross.

It was all downhill from there.

Quaye’s body work slowly began to take effect; it was an area he targeted throughout the fifth, backing Lamptey up and forcing him to clinch in close quarters.

The body attack continued throughout the sixth. Lamptey was a spent force by the end of the stanza.

Smelling blood, Quaye pounced in the seventh, battering his opponent up and downstairs. A right cross introduced Lamptey to the canvas for the first time. He was too fatigued to continue, forcing the bout’s end.

“I know that I have what it takes to beat Benjamin Lamptey,” Quaye exclaimed afterward. “He said he was robbed in the first fight but I have proved to him that my first win wasn’t a fluke.

“Now I’m ready to take on any boxer in my division. My target is the world title.”

There are several top notch champions at lightweight, including Mikey Garcia, Vasyl Lomachenko and Robert Easter Jr. Garcia and Easter will square off this Saturday in a unification bout. Quaye has a long way to go before reaching that level but, for now, he is the man in Ghana.