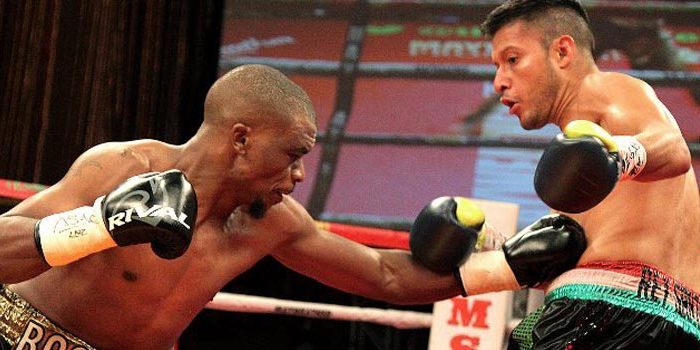 Once-beaten contender Sharif Bogere will enter the ring for a 10-round super lightweight bout against Chile’s Oscar Bravo in a fight that highlights undercard action Friday, August 3 from Sam’s Town in Las Vegas.

The night is headlined by rising lightweight contender Ladarius Miller facing Dennis Galarza in the Premier Boxing Champions on Bounce main event. The telecast begins at 9 p.m. ET/6 p.m. PT and features a 10-round welterweight showdown between Cesar Barrionuevo and Abel Ramos, plus unbeaten junior welterweight Juan Heraldez taking on Kevin Watts in a bout scheduled for 10 rounds.

Tickets for the event, which is being promoted by Mayweather Promotions, begin at $25, are on sale now and will be available at www.samstownlv.com/entertain.

The 29-year-old Bogere (31-1, 20 KOs) has won eight-straight fights heading into his August 3 matchup. Born in Uganda but now fighting out of Las Vegas, Bogere lost a close decision to Richar Abril in a vacant title fight in 2013 before putting together his current winning streak in hopes of attaining another title shot. He will be opposed by Chile’s Bravo (22-7, 10 KOs), who most recently lost a narrow decision to unbeaten prospect Saul Rodriguez in a fight that he sent Rodriguez to the canvas.

Originally from Uzbekistan, Rakhmanov (10-0-1, 5 KOs) fights out of Las Vegas and will look to put on a show in his adopted hometown as he enters the ring at Sam’s Town for the second time this year. The 28-year-old’s previous fight this year saw him stop Hylon Williams Jr. in the second round to make it six wins in a row since he fought to a split-draw against Alfonso Olvera in 2016. He will be opposed by the 24-year-old Taylor (9-1), who fights out of Houston and also enters the August 3 bout with a six-fight winning streak.

The 27-year-old Douglas (18-2, 13 KOs) will step into the ring on August 3 looking to put on an impressive performance to get back in the mix for a world title shot. Douglas impressive victories over once-beaten Frank De Alba and Alexei Collado, before dropping decisions to former champion Javier Fortuna and Edner Cherry. The Delaware-native most recently scored a first round knockout of Isaias Martin Cardona in December 2017.

A multi-sport athlete who has competed in both boxing and mixed martial arts professionally, Oklahoma City’s Rhodes (26-2-1, 12 KOs) bounced back from decision losses to former champion Sergey Lipinets and Edner Cherry to score three-straight wins, including an April victory over Mike Fowler. The 30-year-old Rhodes was unbeaten in his first 23 pro fights and will look to make it four in a row on August 3.