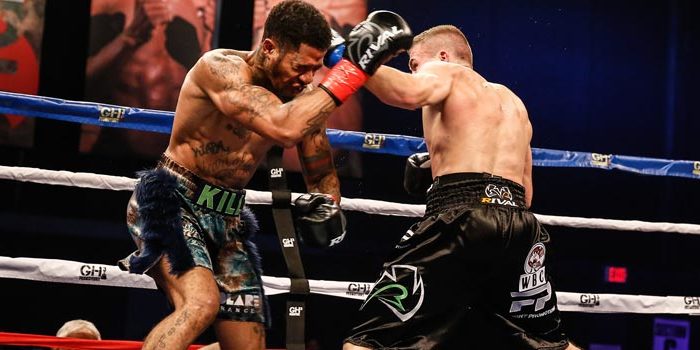 Baranchyk now advances in the World Boxing Super Series junior welterweight tournament. He will face the winner of next week’s quarter-final bout between Josh Taylor and Ryan Martin.

Yigit has been out of the ring since December 2017, when he won a twelve round unanimous decision over Joe Hughes at Leicester Arena.

Baranchyk had a big win in March, when he battered and stopped Petr Petrov in eight rounds.

Baranchyk was fierce in the first two rounds, loading up and landing some very hard punches on Yigit. The left eye of Yigit was pretty bruised up. Yigit was willing to  take the punches and trade shots with the bigger man.

They were trading some heavy blows in the third, with Baranchyk getting the better of the action. A close fourth and fifth, but Baranchyk was landing the harder blows. Yigit’s left eye now had a cut at this point.

After several more bruising rounds, the left eye of Yigit was swollen shut and it was fully bruised up.

In the seventh round, Baranchyk lost a point for pulling Yigit down and hitting. The big puncher still had the clear advantage in the bout and wobbled Yigit in the closing seconds of the seventh.

The contest was stopped at the end of the seventh, due to the damage Yigit was taking and the state of his left eye.

Also on the card, hot junior welterweight prospect Subriel Matias (12-0, 11 KOs) saw his knockout streak come to an end, under very odd cirumstances, when he picked up a first round disqualification over Fernando Saucedo (62-9-3).

Saucedo was being battered, and his corner began climbing up the steps and went on the mat to stop the fight, but then changed their mind and walked back down to the corner. And once the referee realized what happened, he called off the fight and disqualified Saucedo for his corner coming on the mat.