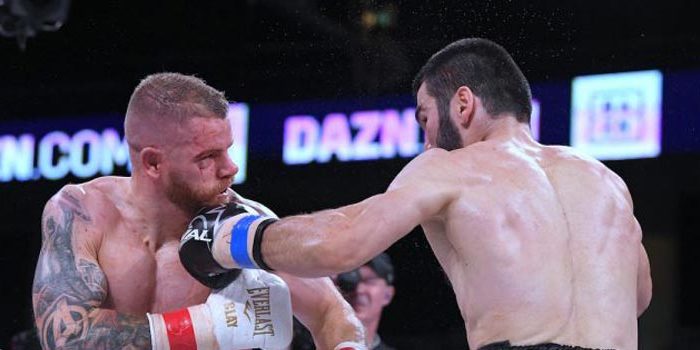 Callum Johnson went after Artur Beterbiev on Saturday night. Johnson dropped the Russian knockout artist in the second round, but his aggression against a huge puncher ultimately proved to be a catastrophic strategy for the British light heavyweight contender.

The hard-hitting Beterbiev knocked out Johnson in the fourth round of a fascinating slugfest DAZN streamed from DePaul University’s Wintrust Arena in Chicago.

Beterbiev, 33, kept his perfect record intact by recording his 13th knockout in his 13th professional fight and defended his IBF 175-pound championship. Johnson, also 33, lost for the first time as a pro (17-1, 12 KOs).

Beterbiev dropped Johnson for the second time in the fight with 37 seconds to go in the fourth round, after landing two right hands, one to Johnson’s jaw and another to the side of his head. A staggered Johnson tried to get up from his gloves and knees, but he didn’t beat referee Celestino Ruiz’s count before it reached 10 at 2:36 of the fourth round.

Beterbiev and Johnson each landed hard shots during the third round, but both were respectful of his opponent’s power because each fighter scored a knockdown before that third round started.

Ruiz seemed to tell Beterbiev and Johnson to stop boxing once Johnson’s head went through the top and middle ropes following an awkward exchange late in the first round.

Beterbiev still landed a short right hand that floored Johnson as he came back through the ropes. Johnson went down with 21 seconds to go in the first round.

Ruiz counted it as a knockdown, despite that he yelled, ‘Stop,’ prior to Beterbiev landing that shot that dropped Johnson.

Johnson landed a left hook with just over two minutes to go in the first round. That shot made Beterbiev fire back with hard shots of his own that made Johnson move away from him.