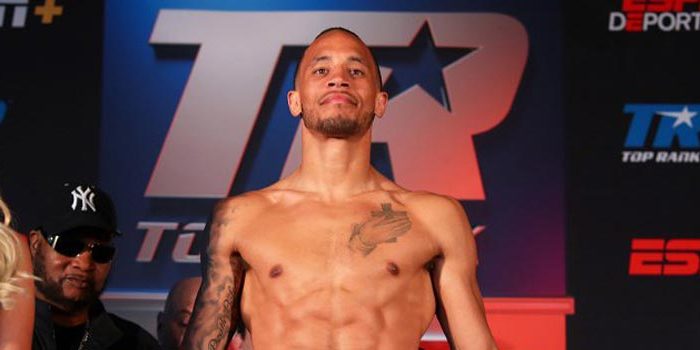 MGM’s Park Theater, Las Vegas – Rob Brant (24-1, 16 KOs) shocked a lot of experts, as he fought his way to a twelve round unanimous decision over Ryota Murata (14-2, 11 KOs) to capture the WBA “regular” middleweight title.

In a shocking turn of events, Brant outboxed, outworked and at times was beating up the Olympic gold medal winner. Murata had no answers to change the outcome, as Brant was far busier and was very accurate with is punches.

Brant also showed a solid chin, with his ability to take the hard shots that Murata would land.

The upset win is a big dagger in the plans of Top Rank, who planned to match Murata in a major fight against Gennady Golovkin in the first half of 2019.

Brant came out very aggressively and had success with his combination punching. He kept up his torrid pace in the second which drew a smile from Murata who kept his focus on attacking the body of his opponent to slow him down. Murata had a lot more success in the third, landing several hard shots both upstairs and downstairs.

Murata kept up the attack to the body and started to slow Brant’s punch output in the fourth. Murata hurt Brant in the fifth round with a big right hand and followed it up with several more hard punches as Brant valiantly fought back. He was able to regain his legs and landed a big combination of his own before the round ended. Murata really began to pour it in in the seventh, trapping the American in the corner, forcing him to hold.

The eighth began with a more tactical start until Brant turned it on to end the round. The ninth round was fought at a frenzied pace as Brant increased his punch output again. He was able to stun Murata twice. Murata had a better tenth round that was close like many of the previous rounds.

Both fighters dug deep in the championship rounds feeling that the fight was up for grabs. The furious pace continued in the final round with Brant hurting Murata two more times before the final bell rang.

With the victory Brant became a world champion for the first time. The Minnesota native is promoted by Greg Cohen.

Murata captured his title last October when he stopped Hassan N’Dam in 7 rounds in Japan. The fight was a rematch of N’Dam’s controversial split decision win over Murata in May in a bout most observers felt Murata deserved to get the win.

Brant bounced back from his loss last October to Juergen Braehmer in the World Boxing Super Series with a first round knockout of Colby Courter in a tune-up fight in March. Brant moved up to the super middleweight division for the fight against Braehmer.