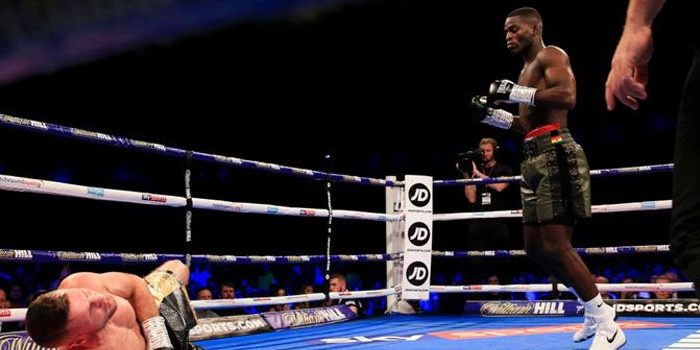 Ghanaian-born Brit Joshua Buatsi was at his destructive best as he blasted aside Tony Averlant inside the first three minutes at the Metro Radio Arena on Saturday.

Much of the pre-fight talk centred on whether Buatsi could better domestic rival Anthony Yarde’s seventh-round stoppage of the Frenchman, and the Olympic bronze medalist made an emphatic statement with a first-round demolition job.

The Croydon 25-year-old oozed class from the opening bell and he quickly got down to business behind a razor-sharp jab in defence of his WBA International light-heavyweight title.

In dominant fashion, Buatsi suddenly ripped in a crippling blow to the ribs that had Averlant grimacing on the canvas. The Frenchman somewhat reluctantly managed to return to his feet, but more heavy blows came raining in.

Another body shot forced the 34-year-old to take a knee and, with the fight beaten out of him, the contest was over.

“It’s hard to give an assessment straight after the fight. I need to go back and watch it,” Buatsi said.

“I saw that the body shot really hurt him and he was in pain, so I targeted that area. It was less than a round and I can’t be too harsh.

“I have to keep working hard and dealing with the opponents put in front of me, The tougher they are, the better I perform, there’s a lot more to show.”

Buatsi was joined ringside by fellow British light-heavyweight Hosea Burton after the fight and both agreed to a potential future clash.