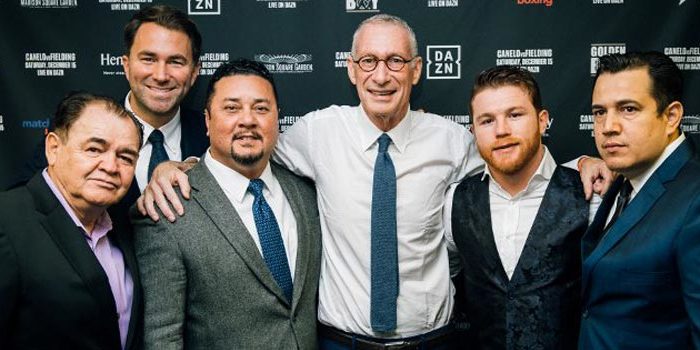 Canelo Alvarez (50-1-2, 34 KOs) – the undisputed king of pay-per-view boxing – will usher in a new era in the sport by signing an 11-fight deal with global sports streaming leader DAZN. The journey begins Saturday, Dec. 15 when Canelo makes his first appearance at the historic Madison Square Garden challenging Rocky Fielding (27-1, 15 KOs) for his WBA Super Middleweight World Title. This groundbreaking deal with Canelo will be the richest athlete contract in sports history.

As part of the partnership, Golden Boy Promotions will put on up to 10 high-caliber fight nights per year that will stream live on DAZN beginning in early 2019.

The historic deal marks a major change in the boxing landscape, where its biggest stars traditionally fought on pay-per-view. Now, sports fans can view Canelo’s fights and the deep Golden Boy Promotions stable for a low monthly subscription cost. These fights will be available in all DAZN markets, including the United States, Canada, Italy, Germany, Austria, Switzerland and Japan.

“I’ve always liked a challenge, and this is yet another challenger in my career,” said Canelo Alvarez. “Being part of this historic deal will require me to prepare myself even more and offer fans even better performances. At the same time, I am humbled to be selected to lead this new vision for the sport of boxing, which will without a doubt be for the benefit of the fans.”

“This is easily one of the best days in the growing history of Golden Boy Promotions,” said Oscar De La Hoya, Golden Boy Promotions Chairman and CEO. “We are committed to making this sport as accessible as possible and at an affordable price for all the fans. My dream has been to make boxing a sport for all. DAZN has the perfect platform to make this dream come true, and with the biggest star in the sport at the helm of this journey, I have no doubts that we will succeed in unimaginable ways.”

“We are thrilled to be exclusive partners with Golden Boy Promotions and Oscar De La Hoya,” said John Skipper, DAZN Group Executive Chairman. “By bringing Canelo’s fights to DAZN, we will turn his pay-per-view success into a growth engine for subscribers – a truly transformational moment for our business and the entire industry.”

Alvarez is coming off the biggest win of his career in September, a thrilling majority decision victory against Gennady “GGG” Golovkin to become the WBC, WBA, Lineal and Ring Magazine Middleweight champion. His 50-win career also boasts victories over Miguel Cotto, Amir Khan, Erislandy “The American Dream” Lara, Austin Trout, “Sugar” Shane Mosley, among many others. Now Alvarez will now seek to join a small and illustrious list of three-division world champions from Mexico as he steps up to 168 pounds to challenge Fielding.

DAZN burst on to the scene just over two years ago, debuting in Germany, Austria, Switzerland and Japan. Its early success across Europe and Asia was followed by launches in Canada (2017), Italy (2018) and the United States (2018), where DAZN announced blockbuster deals with Matchroom Boxing and Bellator MMA to deliver a stacked slate of fight sports content upon entry into the market.

The DAZN-Golden Boy deal includes a large production element, which places Oscar De La Hoya as Executive Producer of the 12 live fight nights annually. The live productions will be a collaboration between DAZN and Golden Boy Media and Entertainment, De La Hoya’s in-house production arm, and will push the boundaries of traditional boxing shows by incorporating new features with virtual graphics and social media interaction.

Oscar De La Hoya’s 7,000-hour library of fights spanning his career as a boxer and a promoter are included in the partnership and these classic bouts will be available on DAZN. Additionally, Golden Boy Media and Entertainment will produce volumes of shoulder programs for the DAZN platform, including live studio shows such as “Between the Ropes” and its award winning “Mano a Mano.”  De La Hoya has had a vision for the sport of boxing, and part and parcel to that vision are new approaches to telling the stories of the fighters for a global audience through live, scripted and social media programming.  The new partnership between DAZN and Golden Boy allow this vision to flourish and to create narratives that appeal across demographic categories worldwide.