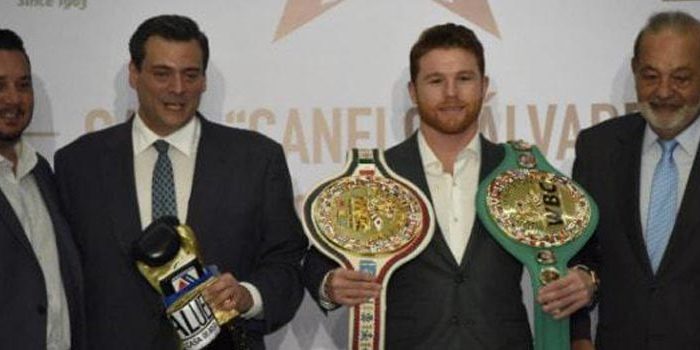 The magnificent Soumaya museum located in the very heart of Mexico City, was the apt setting where World Boxing Council middleweight champion Saul “Canelo” Alvarez received his Green and Gold Belt from the ultra-rich Carlos Slim and President of the WBC, Mauricio Sulaiman.

But there was so much more.  The ornate and priceless Chiapas belt designed by artisans depicting pre-Hispanic warriors, plus the wondrous Huichol belt that bears the name “The strongest deer in Mexico.”

While Canelo`s baby daughter was cradling the Champion`s wrist belt in her tiny hands. And to top it off his coach Eddy Reynoso was presented with the trainer`s belt!

Carlos Slim, who built the museum in memory of his late wife, said that Mexico needs more role models like Saul Alvarez, a young man who dreamed of sporting glory and even when he has conquered it, he continues to work with the same passion and total dedication. He even commented that Saul could receive the National Sports Award soon.

Mauricio Sulaiman said: “This day is very special, because today we recognize a champion who has dedicated his life to boxing, to put on high the name of Mexico. A young man who does not forget his roots and who has been an inspiration for many young people… Saul Alvarez. His contest against Gennady Golovkin to win the belt was one of the great fights in history.”

“I`m WBC champion and in front of all of you I promise to wear the colors with pride and defend my title against the best of my division,” Canelo said.

Jose “Chepo” Reynoso, who`s been in Canelo`s corner since he was thirteen-year-old boy said this day is indescribable, because Saul has dedicated himself    with sheer determination on a path which has not been easy, stressing:  “Saul has never given up, has always gone in search of his goals and achieved them.”