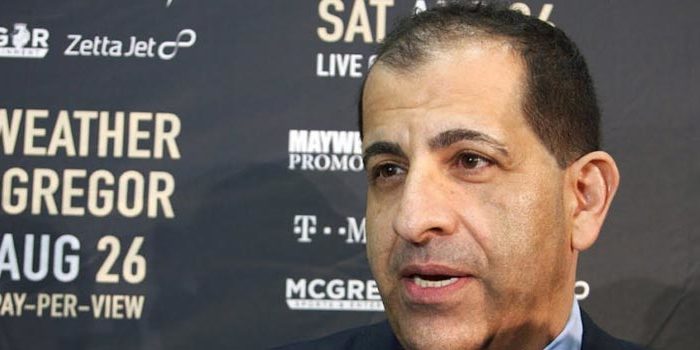 The Showtime executive has discussed their possible rematch with Mayweather, Al Haymon, Mayweather’s adviser, and Leonard Ellerbe, the CEO of Mayweather Promotions. It won’t happen in December, the month Mayweather mentioned when he revealed he wants to fight Pacquiao again in an Instagram video posted September 15 from a musical festival he and Pacquiao attended in Tokyo.

Espinoza is convinced, however, that Mayweather wasn’t merely trying to take attention away from the Canelo Alvarez-Gennady Golovkin rematch by announcing his Pacquiao plan the day that fight took place in Las Vegas.

“I think Floyd is very serious,” Espinoza told BoxingScene.com on Tuesday before a press conference to promote the Deontay Wilder-Tyson Fury heavyweight title fight December 1. “I think people doubted him because of the way it was announced and the timing of the announcement. I think that was just another added bonus for him. But having had discussions with him and discussions with his business people, he’s definitely serious.”

Mayweather’s victory over Pacquiao in May 2015 made more money than any boxing event in the history of the sport. It generated a record 4.6 million pay-per-view buys and produced more than $600 million in overall revenue.

The anticlimactic nature of the fight itself left fans displeased, but Espinoza still thinks a second battle between the 41-year-old Mayweather and the 39-year-old Pacquiao would be a huge financial success.

“I believe so,” said Espinoza, Showtime’s president for sports and event programming. “They’re two fascinating personalities, it’s a classic matchup and Manny feels like he’s got unfinished business. Is it as big as the first one? I’m not sure. But I definitely know it’s one of the biggest fights, if the not the biggest fight, that can be made, still, in boxing.”

A Mayweather-Pacquiao rematch became more saleable once Pacquiao (60-7-2, 39 KOs) knocked out Argentina’s Lucas Matthysse (39-5, 36 KOs, 1 NC) in the seventh round of his last fight to win a version of the WBA’s welterweight title July 15 in Kuala Lumpur, Malaysia. The Filipino icon lost his previous fight by unanimous decision to then-unknown Australian Jeff Horn in July 2017.

“That remains to be seen,” Espinoza said. “You know, Floyd likes to surprise people. I’m not sure what his plans are for Tokyo. I’ve heard a range of different things. I think he’s playing that one close to the vest, even with us.”

As pleased as Espinoza is from a business standpoint about Mayweather’s probable return, he didn’t think the undefeated five-division champion would end his third retirement.

“I was surprised,” Espinoza said. “We had some very, very preliminary, hypothetical discussions, where we said, ‘Oh, we might be able to do a Pacquiao rematch if Pacquiao gets another win or two, and then gets some momentum.’ But it was always something we were thinking about. ‘Maybe if this, if that, at some point in 2019.’ Obviously, he accelerated that timetable. And [I’m not sure] whether it was a decision he made or just because he was there, face-to-face with Pacquiao, and had a unique marketing opportunity.

“The other thing we’ve seen Floyd do is he does test the waters. He does do his own market research. So there was a lot of market research that was done, in terms of the McGregor opportunity. It was six months before anyone really took him seriously. But in those six months, he saw something that made him think, ‘This is a viable event.’ So I think part of it may have been, ‘Is there an appetite for this?’ And I think, based on the reaction, there is.”