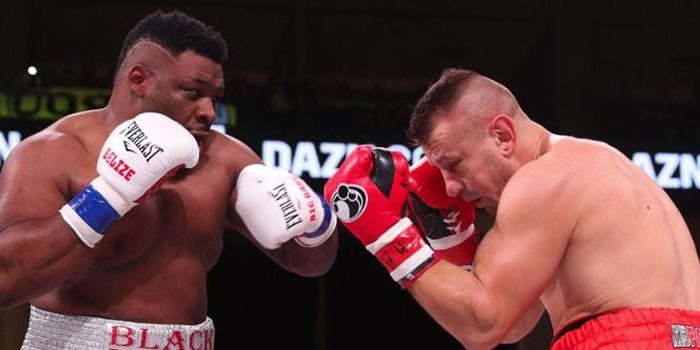 Heavyweight contender Jarrell Miller (22-0-1, 19 KOs) was a monster, with nearly 100-pounds of weight over former two-division world champion Tomasz Adamek (53-6, 31 KOs) – which made it no surprise that Miller crushed the Polish veteran in two rounds at the Wintrust Arena in Chicago.

Miller is now moving forward to a showdown with Fres Oquendo for the WBA “regular” heavyweight title.

Adamek, 41-years-old a former world champion at light heavyweight and cruiserweight, is now at the end of his career. Going into this fight, he won three in a row since getting knocked out by Eric Molina in April 2016.

Both fighters were landing their shots in the first round. Miller’s punches were much harder. Adamek was landing good punches to the head and body. He was moving away as Miller was looking to chase him down. Adamek was stung by a big body shot. He managed to stay on his feet and stayed on the move for the rest of the round.

In the second round, Miller went right to work with big shots. He landed two big uppercuts that sent Adamek down for the full count.

“I noticed that my size in coming forward, he missed a couple shots and he was winded from just missing. And so I know he knows I’m this big guy, I’m not going to be a sitting target, I’m going to keep coming forward. Have fun, that was it, go to the body, and mix up the middle a little bit,” Miller said.

“When it comes to boxing, there’s boxing and trying to maneuver. Eddie Hearn is still keeping him away from me right now, but I think the AJ fight is going to come through sooner rather than later. It’s gonna be crazy, I can’t wait,” Miller said.