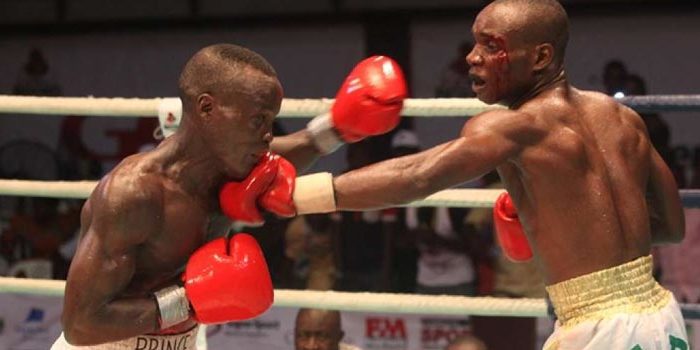 Reigning African Boxing Union (ABU) lightweight champion, Oto “Joe Boy” Joseph of Nigeria, has vowed to mess up the face of his Ghanaian challenger, Anama Dotse, when they clash in the international lightweight challenge bout at GOtv Boxing Night 16 on 14 October at the Indoor Sports Hall of Teslim Balogun Stadium, Lagos.

The bout is one of the two international contests scheduled for the event.

Speaking in Lagos on Friday, the hard-hitting ABU champion said he is in good shape for the fight and he is ready to make his opponent suffer.

“I am in the best shape possible. This is a bad omen for Dotse, who should know that Nigeria is superior to Ghana in every way. I will prove that superiority by messing up his face. His face remains smooth because he has been meeting soft opponents. That will end at GOtv Boxing Night,” bragged Joe Boy.

GOtv Boxing Night 16 will feature nine bouts across different weight divisions, the highest number since the show began in November 2014.

The headline fight is the West African Boxing Union (WABU) lightweight title clash between Rilwan “Real One” Oladosu of Nigeria and Ghana’s Benjamin Lamptey. Also scheduled for the night is the national light heavyweight title bout between Kabiru “KB Godson” Towolawi and Adewale “Masevex” Masebinu. In the featherweight class, Waidi “Skoro” Usman will have a rematch with Chibuzor “T Boy” Obi.

The event will equally feature alumni of the last two editions of GOtv Boxing NextGen Search. Leading the pack is Opeyemi “Sense” Elijah, best boxer at GOtv Boxing NextGen 4, who will take on Sheriff “Oshe” Ogunbanjo in a super bantamweight duel. Taiwo “Esepo” Agbaje will take on Tope “TP Rock” Musa in a lightweight clash; while Azeez “Who Say So” Tijani will square up with Waheed “Showmax” Shogbanmu,

Another GOtv Boxing NextGen graduate, Isaac “I Star” Chukwudi will slug it out with Adeyemi “Spirit” Adekanla in a welterweight clash, while Aminu “Lucky Boy” Akintayo would face Mutiu “Machine” Lawal in a super flyweight division contest

The event will be beamed live on SuperSport in 47 African countries. The best boxer at the event will go home with a cash prize of N1.5 million alongside the Mojisola Ogunsanya Memorial Trophy.