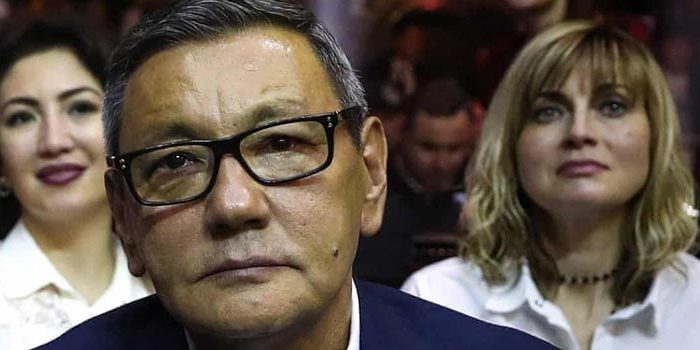 He is blacklisted by the US treasury, which has accused him of being one of Uzbekistan’s “leading criminals” with “links to the heroin trade”. Yet Gafur Rakhimov, the man expected to be elected as the president of amateur boxing’s governing body (AIBA), says he will clear his name – and then lift his sport off the ropes.

In a wide-ranging interview with the Guardian, Rakhimov also claims that Aiba had been “days away from bankruptcy” earlier this year and accepted that relations with the International Olympic Committee – which has warned that a full boxing programme at Tokyo 2020 is in “jeopardy” under Aiba – were in a bad way.

Rakhimov, who became the interim president in January after Aiba’s former president Wu Ching‑kuo was suspended over governance and finance issues before stepping down despite denying all allegations, said he could be trusted despite the US treasury linking him to the international criminal network “Thieves In Law”.

In a vigorous defence of his reputation, Rakhimov says: “I have never been personally involved in any transnational criminal organisations or any other criminal activities,” before providing documents he said showed he had been taken off Interpol’s list in July.

“These lies were fabricated by the former regime in Uzbekistan because they wanted my businesses to support them financially,” he says. “But I refused. The pressure continued relentlessly until my family and I were forced to leave the country in 2010 to protect ourselves.

“They then launched a misinformation campaign against me, in which they used the levers of state to harass me, and reported false allegations about me to the US authorities to destroy me.”

Rakhimov said many of his enemies are now in prison before revealing his lawyers had petitioned the US treasury to get his name taken off the blacklist. “The new Uzbek government has provided official letters noting that these allegations are ‘unfounded’ and ‘untruthful’,” he says.

This month the IOC took a dim view of Rakhimov running for president and also warned that if Aiba’s governance issues were not addressed at its congress this week “the existence of boxing on the Olympic programme and even the recognition of Aiba is under threat”.

Rakhimov believes he can win the IOC around with a range of reforms – but would be prepared to stand aside to ensure boxing was fully represented at the next Olympics.

“The IOC has six concerns about Aiba, including financial management, judging, refereeing and doping,” he says. “But we have been working day and night over the past nine months to not only save Aiba from bankruptcy, but also to improve our governance systems in a wide range of areas. I believe I can bring in reforms and steady the ship. But I will never stand in the way of an Olympic future for boxing.”

Last year the Guardian revealed Aiba was at risk of going under after the Azerbaijani company Benkons demanded it immediately repaid a $10m loan from 2011. To make matters worse, the Chinese group First Contract International Trade also wanted it to pay back a $18m investment into Aiba’s marketing arm, BMA. However, Rakhimov now says the situation was even more precarious than reported.

“Aiba faced an extremely difficult situation at the beginning of this year,” he says. “In my entire business career, I have never seen anything close to this.

“Aiba was days away from bankruptcy but using some of my links and acquaintances I have already helped restructure tens of millions of debt that Aiba owed its creditors.

“In the future, all key decisions will have to be taken by the president and the executive committee working together. That has restored trust and governance in our operations. As for financial transparency we are working hard to reduce Aiba’s liabilities, which had ballooned under the former leadership.”

The IOC froze all payments to the association last December and a spokesman said Aiba still needed massive reform, despite Rakhimov’s overtures. “We haven’t changed our position,” he said. “Aiba is in grave danger. We will make sure boxing takes place in some form at the 2020 Olympics but it might not be under the auspices of Aiba.”

Rakhimov is the only candidate able to stand in the presidential election, although he may yet face a challenge from the president of the Asian boxing federation, Serik Konakbayev.

Konakbayev, who is supported by England Boxing, has appealed to the court of arbitration for sport after originally being declared ineligible to stand after failing to attract sufficient support from governing bodies before the deadline. Cas is expected to make its ruling public on Tuesday.