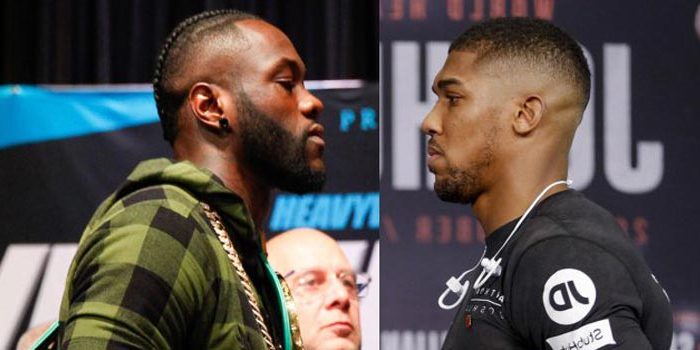 Anthony Joshua’s promoter Eddie Hearn made a “much-improved” offer for a world heavyweight title unification fight against WBC champion Deontay Wilder. But so far the overtures have been rebuffed, Hearn has said.

The 28-year-old Joshua, who holds the WBA, IBF, WBO and IBO crowns, stopped Russian Alexander Povetkin at Wembley Stadium last month and is locked in to stage his next bout at the same venue in April next year.

Wilder, who is scheduled to fight Tyson Fury in Los Angeles on Dec. 1, labelled Joshua a “coward” at a news conference on Monday for failing to secure a bout between them.

“We keep requesting these meetings and they don’t want them to take place, which is a bit strange when you’re talking about the biggest fight in world boxing,” Hearn told Sky Sports.

“We wrote to (Wilder’s camp) after our fight with Povetkin and said we need to make our move soon because of mandatories in place for April 13, so could we have a meeting,” Hearn added.

“They got back and said no, we’re not interested in meeting you, make us an offer and we’ll let you know.

“We went back and made a much-improved offer from the first one – this one with a percentage split – a very attractive offer and then requested a meeting, but they turned round and said ‘no, we won’t meet you.’”

Based on past interviews, Wilder’s team is not interested in making a deal until after the Fury bout is concluded – and Hearn wants a deal in place prior to the December 1 contest with Fury.

The next contest for Joshua is slated for April 13.

The winner of Wilder vs. Fury is sure to be the top candidate to fight him, but many insiders believe Joshua will end up facing domestic rival Dillian Whyte in a rematch.

Fury, who captured the WBO, WBA, IBO, IBF world titles when he shocked Wladimir Klitschko in November 2015, was inactive until he returned to the ring in April of this year. Wilder is third fight of his comeback.