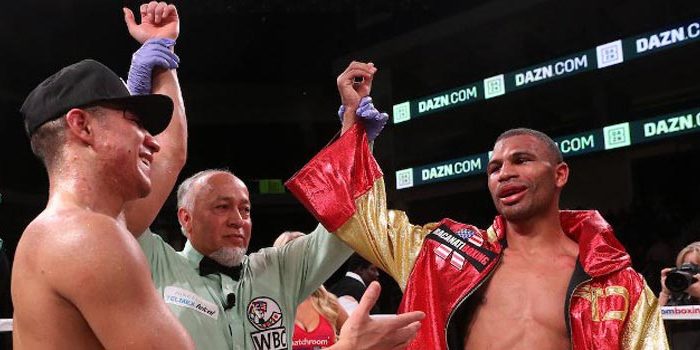 Dulorme was coming back from a ten round decision loss to Yordenis Ugas in August 2017, where both boxers were knocked down.

And Vargas was returning from a twelve round majority draw with Adrien Broner in April 2018.

Dulorme started the first by landing a solid right hand. Vargas was attempting to make adjustments and appeared to take control, but then he got rocked at the end of the first round.

During an exchange in the second, there was a clash of heads that created a bad cut above the right eye of Vargas. The third round was close, as both were picking their spots in a tight fight.

They were trading at the start of the fourth. Vargas landed a few solid shots that hurt Dulorme and had him holding on. Dulorme was fighting back near the end, with Vargas outlanding him.

Dulorme was applying a lot of pressure in the fifth. He was landing a lot of jabs. Just when it appeared that Vargas hurt him, Dulorme came back to stun Vargas.

Dulorme dug heavy to the body in the eight and was trading hard shots with Vargas. He was controlling the pace with a solid jab to the body.  The pressure was applied by Dulorme in the ninth, with very close action as they continued to pick their punches.

During the tenth round, Vargas landed a good counter that sent Dulorme down. Dulorme recovered well and managed to box the rest of the round.

The eleventh was close. Vargas was landing the better punches, with Dulorme being more active. And in twelfth saw Dulorme boxing very well and picking his punches as Vargas the one coming forward. And he cracked Vargas with a solid counter to score a knockdown in the closing seconds.