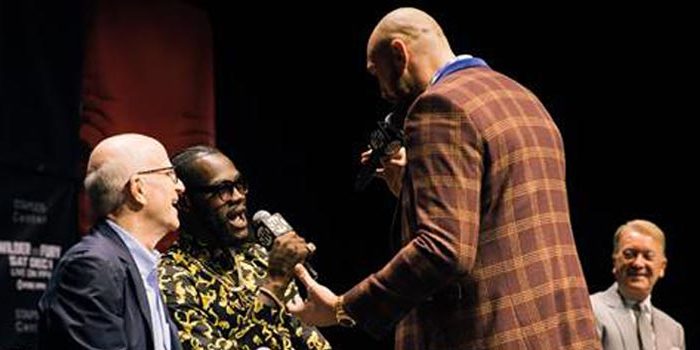 Three days of a boisterous, tension-fueled international press tour came to a close on Wednesday in downtown Los Angeles when heavyweight giants Deontay Wilder and Tyson Fury had to be separated by security after the verbal sparring threatened to turn physical in front of a large contingent of both Wilder and Fury supporters.

In the closing moments of the third-straight press conference ahead of their December 1 showdown for the WBC Heavyweight World Championship at STAPLES Center, emotions appeared to boil over as both fighters had to be held back

With the whirlwind press tour in the rear-view mirror, the fighters now have 58 days to prepare for the biggest heavyweight fight on U.S. soil since Lennox Lewis KO’d Mike Tyson in June 2002. Wilder vs. Fury is the latest major heavyweight event to take place in the Southland, expanding an already deep history of heavyweight boxing featuring Hall of Famers Joe Louis, Muhammad Ali, Lennox Lewis and Vitali Klitschko, the last of whom faced off at Staples Center in 2003, with Klitschko also stopping Chris Arreola at Staples Center in 2009.

Tickets for the event, which is promoted by BombZquad Enterprises and Queensberry Promotions, in association with DiBella Entertainment and TGB Promotions, are ON SALE NOW. Tickets are priced starting at $75, plus applicable fees, and are available via AXS.com.

Below are flash quotes from today’s event at The Novo by Microsoft at L.A. Live:

“I fought one of the best and I think I’m fighting the next best in line in the heavyweight division, and I do think he’s tough. The thing about Tyson, he’s mentally tough. He’s the Gypsy King and you know what they say about Gypsies; they’re traveling people and they’re fearless people. And that’s why he’s the perfect opponent for this situation, for this occasion of bringing the heavyweight division back. So when I knock him out I can say I knocked someone out that was fearless.

“He’s great for the heavyweight division. He’s charismatic, he can talk, I’ve got a great dancing partner. He’s fearless in the ring and he’s got a background of boxing in his blood; he’s named after Mike Tyson and all that is great. It’s good that he’s from another country so you get to see different cultures, different personalities from the two of us. You’ve got one from America and you’ve got one from Great Britain. So that’s going to make it even more pleasurable for me when I knock him out.

“All this adds up. This is exciting for me and I can’t wait to get back to L.A. What I’m saying is I’m going to knock him out.

“It’s a fight. We can do all this stuff on stage, I can walk around here and I can talk as good as any man in the country. But when it comes to a fight, it’s going to be a hell of a fight. Deontay Wilder: massive puncher. Me: skillful boxer. It’s going to be an epic night. This is a legacy fight and I do believe that’s true. And after I win, he’s going to hire me as his publicist because I do believe I can promote Deontay Wilder back to being heavyweight champion of the world in no time. But there’s no shame in losing to me because I am the greatest boxer of my generation and I can’t be beat, especially not by him.

“There have been many, many fighters before like Deontay Wilder, but there’s never been a Tyson Fury before in the history of boxing. I know that because I studied the game inside out.

“Only in dreams does Deontay Wilder ever knock Tyson Fury out. Only in his dreams

“It’s going to be a great fight. Lately, I’ve seen Tyson fury singing the song, ‘There’s only one Tyson Fury’. I think he stole that from Ricky Hatton and you saw what happened to him. I think that trend will continue.”

“I think Tyson is one of the best, he’s certainly one of the most colorful heavyweights that has come out of Britain. His skills are sublime, he does the impossible. He went over to Germany, he took Klitschko to school; a good Klitschko. He fought the guy and like he said, he’s the lineal champion. He loves the challenge and he’s a traveler. That’s why he’s coming to Deontay’s backyard. He’s coming to the States, he’s fighting one of the most explosive heavyweights in recent years, a guy who can punch. I think styles make fights, and everybody is saying that Tyson is going to be running and Deontay is going to be coming after him. I don’t think that’s going to happen; I think on the night, you’re going to see Tyson stand his ground and you’re going to see some serious fireworks take place.

“This is a great fight, it’s a fight for the fans, it’s great to be here in L.A. to do this fight. It’s great that we are in America to bring another Brit over here to take the belt back.

“This is the best fighting the best; the two top heavyweights in the world who have stepped up to the plate and made a fight like that.”

“In a city of big events, we have the biggest of events. L.A. has certainly had its share of big fights – Henry Armstrong, Art Aragon, Bobby Chacon, Oscar De La Hoya, Shane Mosley – they’ve all fought here. And L.A. has even hosted its share of heavyweight fights. Jim Jeffries, Jack Johnson fought here, Muhammad Ali fought here as well.  But in terms of major heavyweight title fights in Los Angeles, the list is very short. There have been three Vitali Klitschko fights vs. Chris Arreola, Corrie Sanders and Lennnox Lewis. That’s it. Four fighters have fought for the heavyweight world title in Los Angeles in its history. This is a rare event in Los Angeles. Not since 2009 have we seen a heavyweight title event in L.A. and in a city of can’t-miss events, this is the pinnacle. There’s more than the WBC title at stake, more than pride, this is about legacy and history.”