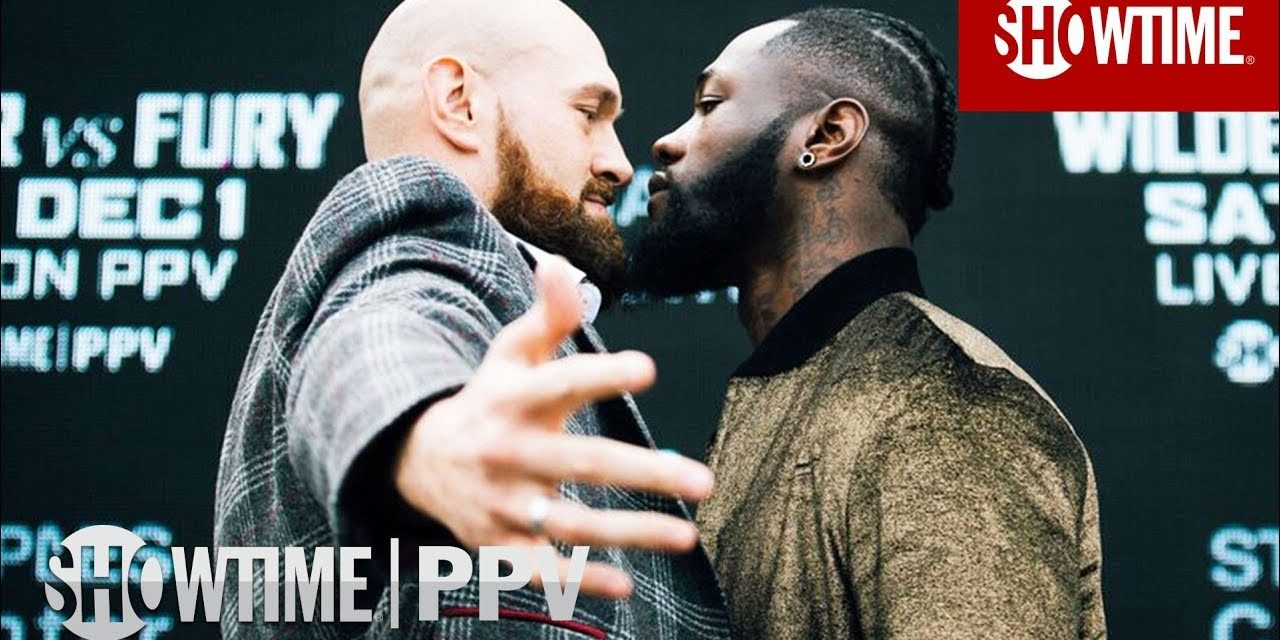 The Deontay Wilder vs. Tyson Fury international press tour continued on the flight deck of the Intrepid Sea, Air & Space Museum on Tuesday and the heavyweight giants wasted no time getting up close and personal with one another once again ahead of their December 1 showdown for the WBC Heavyweight World Championship live on SHOWTIME PPV from STAPLES Center in Los Angeles.

The fighters were led on to the stage by the Brooklyn Nets Beats Drumline and immediately met face to face. Just like a day before in London, the 6-foot-7 Wilder and the 6-foot-9 Fury had to be separated midway through the press conference when Fury ordered Wilder to take his sunglasses off so he could see his eyes. Watch one of the confrontations:

Tickets for the event, which is promoted by BombZquad Enterprises and Queensberry Promotions, in association with DiBella Entertainment and TGB Promotions, go on sale tomorrow/Wednesday, October 3 at 12 p.m. PT. Tickets are priced starting at $75, plus applicable fees, and are available via AXS.com.

The Wilder vs. Fury International Press Tour concludes Wednesday at The Novo By Microsoft at L.A. Live in downtown Los Angeles.

Below are flash quotes from today’s event at Intrepid Sea, Air & Space Museum in New York:

“This fight means everything to the heavyweight division. This division was once in a dark place. A lot of people considered the division boring and not entertaining and not enough great fighters. You know, people always look back at the past and say, ‘Where are the golden days? Where has it gone?’ And now today’s era is different…  We’ve brought the sport back to life in the heavyweight division.

“We all know with me it comes with power and with knockouts. And that’s what I do. I get you guys motivated and I get you guys inspired to come and see a heavyweight fight. Because what you guys come to see in a heavyweight fight is a knockout. And I deliver that each and every time. Like I’ve said before, when I say I promise you, I promise you I’m going to knock out the Gypsy King, as well. TIMBERRRRRR!”

“I’m the one who brought him back. I’m the one who encouraged him when he was in that dark place. I told him, ‘You can do it.’ I dared him to come back. I dared him for this very moment. I want him to have confidence. I want him to have energy. As you can see, that’s nerves. That’s all nerves. Because he knows what’s going to happen. He knows his face is going to get smashed in. And he knows his body will be on the pavement. Let him burn out this energy. It’s entertaining. Because when we get in the ring he’s gonna be all by himself and his demeanor will change. His mannerisms are going to change. He’s so nervous right now. He don’t know what do to with himself.

“Don’t give people false promises. I was born off of false promises and got nothing for free. I promise I’m going to knock you out. I speak it, believe and receive it and it’s mine. I don’t have to show so much energy, baby.”

“Even Deontay Wilder knows to sit in the presence of greatness. Why I am going to beat this bum is because he can’t box. He’s a big swinger and he’s knocked a few bums out. He’s been in 40 fights and 35 of them have been against total tomato cans who can’t fight back. So really he’s only had five fights. If he thinks a five-fight novice is going to land one of those big swinging windmills onto my chin, then he can think again. After he feels a bit of power and a few stiff jabs in the face his ass is going to fall out. This is what’s going to happen: At about round five or six I’m going to start landing the overhand right and going downstairs to the body. And then around eight, nine 10, the championship rounds then it’s welcome to my world. He’s only been 12 rounds once in his career, and I’ve been 12 rounds championship distance many, many times.

“I’m very experienced and I’ve come back against all odds. I’m here today having beaten so many, many problems. How am I going to let this little spaghetti noodle beat me? How am I going to do that? They don’t call me the Gypsy King for nothing. I didn’t come to New York and Los Angeles and all these press conferences to be embarrassed by this little skinny runt. I’m going to knock him spark out.

“I’m a big, fat, bearded man who can fight like hell. You don’t need to see this fat. We all know I’m the master of disaster. We all know I have a fat stomach. But it’s going to look even worse for you when you get beaten by a fat man.

“You are on a suicide mission. You know I’m a CRAZY man. I’m gonna make this bum quit. I’m going to make him quit. I’m going to show him what’s it’s like to fight a real man. A real world champion. Does he even know they don’t just give lineal champion belts away? This man has never beaten a world champion. He fought some bum [Bermane] Stiverne that no one’s ever heard of.

“You already know you’ve lost the fight. You’re very nervous right now because all the pressure is on you.”

“On Dec. 1 on the floor of the Staples Center it’s going to be bombs away. You’re going to get to see the Power, and the Fury when the undefeated, hardest punching and most feared heavyweight of the world, the WBC champion, the Bronze Bomber Deontay Wilder faces the fearless Gypsy King, the undefeated linear heavyweight champion of the world.

“There’s no magic to making a fight of this magnitude. All it takes is for each champion to want to fight. On December 1 two of the three best heavyweights in the world are fighting each other, and the winner can walk away saying, ‘I AM the man!’ Until proven otherwise. That’s what this is all about. As the heavyweights go, so goes boxing. And the heavyweight division is heading for big things. On December 1 you are going to see a heavyweight fight for the generations.”

“There is something undeniably unique about a heavyweight title fight. Not just unique in boxing, but unique across sports. There’s a mystique, a mythical quality. Boxing’s heavyweight champions have always been heroic figures; almost super heroes. There’s a feel, a buzz in a heavyweight championship fight that is unique across all sports. And there’s certainly a unique feel to this fight, as well. We have the two tallest men, the biggest men in the heavyweight division – 6-foot-9 and 6-foot-7; two huge figures both literally and figuratively.

“Deontay Wilder: 40 fights, 39 KOs, most in devastating fashion. He’s one of the hardest punchers not just in boxing today, but modern boxing history. In Tyson Fury we certainly have a unique skill set. You do not see athletes who are 6-foot-9 who move the way Tyson Fury moves. He has a unique set of skills with athleticism. Outside of the NBA there’s not another more athletic 6-foot-9 athlete on the planet. It’s a fascinating clash of personalities and it’s a fascinating clash of styles and we are happy to bring it to you on SHOWTIME Pay-Per-View.”