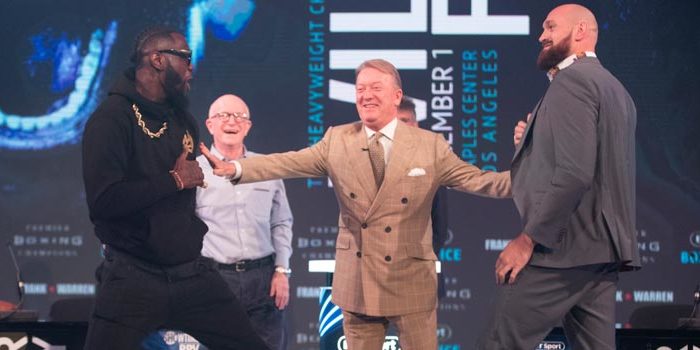 The Deontay Wilder vs. Tyson Fury Press Tour got off to a combative start as the two heavyweight giants went face-to-face in London on Monday, exchanging verbal jabs ahead of their December 1 showdown for the WBC Heavyweight World Championship live on SHOWTIME PPV from STAPLES Center in Los Angeles.

Amidst the back-and-forth jawing, the 6-foot-7 Wilder and the 6-foot-9 Fury had to be separated when Wilder refused to back down from Fury’s challenge to engage in a sparring session.

“I’m going to show you the full power,” Wilder quipped back. “This ain’t no game!”

Tickets for the event, which is promoted by BombZquad Enterprises and Queensberry Promotions, in association with DiBella Entertainment and TGB Promotions, go on sale Wednesday, October 3 at 12 p.m. PT. Tickets are priced starting at $75, plus applicable fees, and are available via AXS.com.

In anticipation of the biggest heavyweight event in the U.S. since Mike Tyson-Lennox Lewis in 2002, the Wilder vs. Fury International Press Tour continues Tuesday at Intrepid Sea, Air & Space Museum in New York and concludes Wednesday in Los Angeles.

Below are flash quotes from today’s event at BT Sport Headquarters in London:

“I believe every word that I say. When I say I’m going to knock a man out and tell him where and how he may lay, it comes to pass. I’m all about devastating knockouts, that’s what I do. There’s no pressure on me. You just need to be there to witness it.

“He has two months to get ready. He’s lost a lot of weight but he needs to lose a little bit more. He already knows he’s going to get knocked out. He can hoot and holler, he can build himself up but he needs to take my advice and speak it, believe it, receive it. He’s going to feel pain he’s never felt before.

“Some people don’t even think I should be fighting Fury at this point in time. Whether they want to see another fight or they don’t think he’s ready right now, we can’t live off other’s opinions. When you come to see a Deontay Wilder fight, you’re only coming to see one thing and that’s me knocking somebody out. You all are looking at the 41st person that’s going to be knocked out.

“The antics aren’t going to work against me. I’m not (Wladimir) Klitschko, this is Deontay Wilder.

“I definitely think I’m the No. 1 heavyweight in the world. I wouldn’t be here if I didn’t feel I was the best. I’m not worried about any other fighters or what they’re saying or how they are hyping themselves up. I already know I’m the part. All you have to do is tune in. I’m about to put him in the oven and make a muffin.”

“I am no challenger for no man. I am the lineal heavyweight champion of the world. That means I’m the best of the best. The elite champion. This is two champions colliding, this is equal-rights champion vs. champion.

“I’m savoring nothing. The only thing I’m savoring is smashing Deontay Wilder’s teeth in. The press has all turned up today to see the biggest fight of our generation between two undefeated giants, and boy are you going to get a fight. You’re in for a real treat, don’t worry about that. I’m in no mood to dance around the ring. There’s not a 15 stone man on the planet that can beat Tyson Fury.

“I have no concern at all about my lack of fights in recent years. If you can fight, you can fight. I picked this fight. I said to Frank, get me this fight. I could have fought another 10 bums and won them too. Nobody forced me to fight Deontay Wilder, I picked him because I believe he’s an easy touch.”

“I will stand right in front of him and prove what I will do. I will punch his face seven days a week and twice on a Sunday. If we fought 30 times, I’d win 30 times.”

“It’s been a long time since the heavyweight division has had two giants like this. Two champions at the top of their game, at the top of their division willing to fight one another. It’s not rocket science making a fight. Deontay spent a lot of time trying to make a fight with another guy from England who didn’t want to fight. When Fury got himself back into the ring and got himself in the shape he is in now, Shelly (Finkel) and Frank (Warren) were able to make this fight very quickly.

“Fury is an interesting guy who has had to overcome a lot of adversity. I think he should be proud of himself for getting his life in order and being able to turn things around. What he’s done in the last six months has been remarkable. I’m still going to admire him after he gets knocked out on December 1.”

“I have nothing but respect for our challenger, Fury. When I was handling Klitschko, we didn’t think Fury had a chance against him. He proved me wrong. He won’t prove me wrong twice.

“We didn’t pick to fight Tyson because we thought he was easy, we believe he’s the best out there. We want to fight the best, and only the best. We have respect for you because your countryman didn’t want to fight even though he was offered a fortune to fight. When it was presented, he said no. I commend you for stepping right in.”

“These are the two best heavyweights because they’re willing to step in the ring together. That’s what great fighters do. We are going to see something special on December 1. I think it’s going to be a fight that nobody expects. This is not going to be cat and mouse, it’s going to be a war. Tyson has a fighter’s mentality. He’s not trying to duck out through contracts, through a backdoor method. He wanted the fight and Shelly and I worked together to make this happen. You cannot miss it. This will be one of the best heavyweight fights for a long time.

“Fury is traveling to the other guy’s backyard like he did when he went to Germany and took Klitschko to school. He’s going to take Deontay’s belt and this is a fight you cannot afford to miss.”

“This is a fight that has captivated America and will continue to captivate America. We have two mythical figures and that’s what people love about the heavyweight division; they are almost superheroes. In particular, these two individuals are the two largest men in the heavyweight division and I mean that in a physical sense as well as their personalities. On paper, in the ring, on the press tour, it’s a phenomenal matchup.”