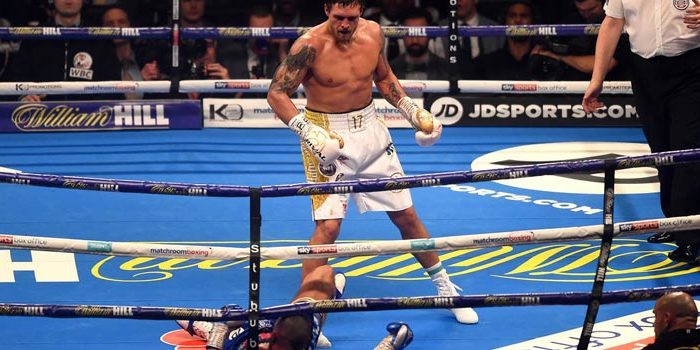 Tony Bellew was anything but the overmatched mark many considered him Saturday night.

Eventually, though, Oleksandr Usyk’s skill and strength were just too much. The unbeaten Ukrainian southpaw ended what had been a very competitive cruiserweight title bout by blasting Bellew with a left hand that knocked out the popular British boxer in the eighth round at Manchester Arena in Manchester, England.

Several left hands Usyk landed earlier in the eighth seemed to affect Bellew. Then, with Bellew backed toward the ropes, Usyk uncorked a straight left hand that dumped Bellew flat on his back with 1:10 to go in the eighth round.

Bellew landed awkwardly, as his head hit the bottom rope. The brave Bellew attempted to get up, but referee Terry O’Connor waved an end to the bout with Bellew on his knees.

The 31-year-old Uysk (16-0, 12 KOs) retained his IBF, WBA, WBC and WBO cruiserweight championships. Most Internet sports books listed Usyk as at least a 7-1 favorite before their fight, but Bellew boxed well during the first seven rounds and made matters more interesting than many fans and experts expected.

The former WBC cruiserweight champion was ahead on two of the three scorecards at the time of the stoppage.

Judges Alejandro Cid (68-65) and Steve Gray (67-66) had Bellew in front through seven rounds. Judge Yury Koptsev had scored their fight even entering the eighth round (67-67).

“I don’t even know what he caught me with,” an emotional Bellew told Sky Sports after his defeat, which he insists will end his career. “He’s a brilliant fighter. He’s exceptional, man. He’s an Olympic gold medalist, a European amateur world champion. He’s done everything. I fought the very, very best.

“You come up against great people sometimes in life and you’ve just gotta accept it. Oleksandr Usyk is pound-for-pound material. I’ve got nothing but great things to say about him. He’s the best I’ve ever fought. He’s slick, he’s strong and he’s exceptional. Give him his credit.”

The 35-year-old Bellew had his 10-fight winning streak snapped and lost by knockout for just the second time in his 11-year pro career. Adonis Stevenson (29-1-1, 24 KOs) stopped him in the sixth round of their November 2013 fight for Stevenson’s WBC light heavyweight title in Quebec City, Canada.

Usyk began battering Bellew in the eighth round. He landed a left hand in the center of the ring that knocked Bellew off balance with 1:35 remaining in the eighth.

Several seconds later, Usyk caught his depleted opponent with another left hand in a neutral corner that buzzed Bellew. Then, after he landed a left hand that wobbled Bellew, Usyk unloaded the left that abruptly ended their fight.

Bellew began slowing down during the previous round, when Usyk’s jab and left hand backed Bellew into a corner early in the seventh round. Usyk also bloodied Bellew’s nose during that round.

Bellew let his hands go with about 1:15 to go in the seventh round. Nothing landed flush, though, as Usyk moved out of Bellew’s punching range and waved him forward.

Usyk’s straight left stopped Bellew in his tracks with 1:13 to go in the fifth round. Bellew fired back with right hands later in the fifth and tried to get to Usyk’s body.

Usyk pumped his jab throughout the fourth round and knocked Bellew off balance with an overhand left. Bellew struck Usyk with a right hand as Usyk backed him into the ropes later in the fourth.

Bellew connected with a straight hand just before the two-minute mark of the third round. Another right by Bellew caught Usyk about 30 seconds later.

Usyk’s straight left landed about 10 seconds later, but Bellew motioned toward Usyk to signify that punch didn’t affect him.

Bellew landed a straight right hand with about 1:15 to go in the second round. He then demonstratively demanded Usyk trade with him by stomping his foot on the canvas.

Usyk didn’t indulge Bellew following those theatrics, but Bellew still landed a straight right hand as Usyk moved backward toward the end of the round. Usyk snuck in a right hook and a stiff jab between Bellew landing those right hands.

Usyk and Bellew showed one another a tremendous amount of respect throughout a first round that lacked action. So little happened in those three minutes, restless fans actually began booing toward the end of the round.

The pro-Bellew crowd cheered wildly following his exceptional effort, though.

Bellew was essentially retired before Usyk called him out following his impressive, unanimous-decision victory over Gassiev on July 21 in Moscow.

Bellew talked his new wife, Rachael, into allowing him to fight one more time Saturday night. Bellew assured her he’ll retire now that he has taken one last huge domestic pay-per-view fight.

Bellew went 7-0 as a cruiserweight, including five knockouts, after Stevenson defeated him nearly five years ago. Before moving up to heavyweight for two TKO defeats of former champ David Haye, Bellew also had won the WBC world cruiserweight title by getting up from a first-round knockdown to knock out Congo’s Ilunga Makabu (23-2, 22 KOs) in the third round of their May 2016 bout in Bellew’s hometown of Liverpool, England.