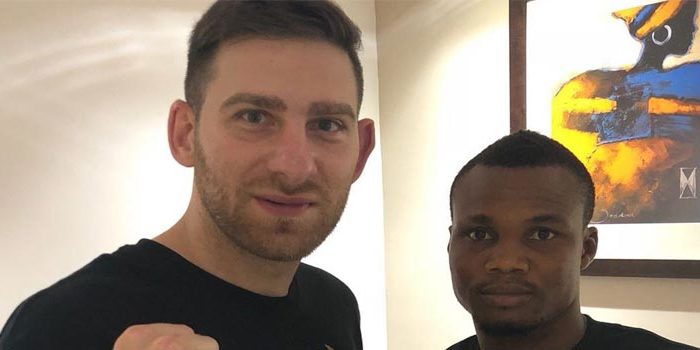 Former WBO Africa lightweight champion, George “Red Tiger” Ashie, says he will only fight national champion, Sheriff Quaye, for a $15,000 purse after the latter challenged him to a slugfest.

Ashie (28-5-1, 20 KOs), had ruled out a possible fight with Quaye earlier. Now, he says he could be tempted to lock horns with his compatriot with a big offer.

Ashie, who signed a three-year management deal with Dubai-based outfit, MTK Global, said he would not fight Quaye if Ghanaian promoters failed to offer him the amount he earned abroad.

In a chat with the Daily Graphic yesterday, Ashie described a possible bout against Quaye as meaningless without a bigger offer since it will bring nothing to his table.

“I don’t like talking about Sheriff Quaye because he is an upcoming boxer but I can fight him if the right offer comes up,” he said.

“When I traveled to fight in my last bout, I didn’t earn less than $10,000, so why should I fight for a less amount against Sheriff Quaye in a bout I know wouldn’t add anything to my career?” he asked.

Meanwhile, Ashie believes Quaye is being influenced by WBO Africa lightweight champion, Emmanuel “Game Boy” Tagoe, to challenge him for a fight and questioned why the national champion is not requesting to fight Tagoe instead.

He believes that inasmuch as “Game Boy” would not want to fight him because he wants a bigger bout, it was his wish to also land a tougher and a big-name opponent.

“If they are not behind Sheriff Quaye’s decision to fight me, why is he not challenging Gameboy because we are all in the same division and can fight each other?” he said.