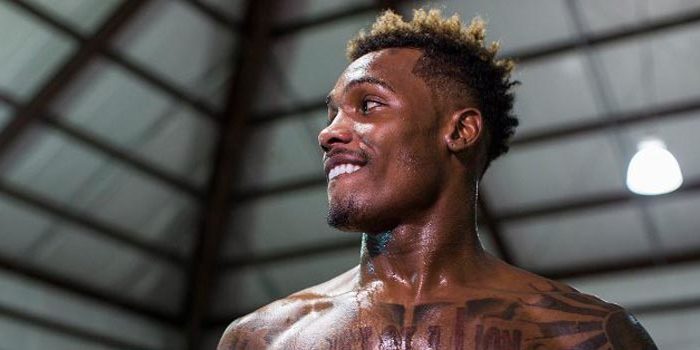 WBC interim middleweight champion Jermall Charlo is the boogeyman of his division to hear it from his trainer, Ronnie Shields.

“They see that Jermall is a big, strong, skilled fighter who takes a good shot, and that he’s always in condition and ready to fight. That’s something they’re afraid of. Jermall is one helluva fighter and one tough fight for anybody that’s walking around on this planet right now, and it’s a simple as that.”

The 28-year-old Alvarez will pursue a third crown in as many divisions on December 15 against 168-pound Rocky Fielding, but retains his middleweight championships.

The 31-year-old Jacobs (35-2, 29 KOs) has said that he wants to face Alvarez, Charlo or else have a return bout against Golovkin, having earned his third straight victory over Sergiy Derevyanchenko for the IBF’s crown, ending the loser’s stoppage run at six.

“I believe that Triple-G is going to avoid fighting Jermall, and then we’ll go straight to Canelo,” said Shields. “Then I think Canelo’s going to avoid Jermall, and, according to the rules, he’ll have to give up his belt. And let’s see who Danny chooses to fight, next.”

“Everybody at 160 pounds, trust me, they are gonna take three-or-four looks before they sign the contract to fight Jermall,” said Shields. “That’s because they see everything that I see. They see it all, and that’s why none of them wants to fight Jermall.”

In 17 fights from December 2008 until November 2015, Charlo registered 16 stoppages and a shutout unanimous decision, the latter over Michael Finney in March 2015.

Charlo’s run of five knockouts in his past six fights began with his 154-pound championship victory that dethroned Cornelius Bundrage. Charlo floored the 42-year-old Bundrage four times during a third-round stoppage in September 2015 —exactly seven years to the day he made his pro debut.

In succession, Charlo dropped Wilky Campfort three times during a fourth-round TKO victory in November 2015, earned a unanimous decision over left-handed former champion Austin Trout in May 2016, and scored three knockdowns during a fifth-round knockout of previously unbeaten Julian Williams in December 2016.

Charlo’s 160-pound debut was July’s two-knockdown, fourth-round TKO of Argentina’s Jorge Sebastian Heiland, who was stopped for the first time in his career.

During a February conference call in advance of facing Hugo Centeno Jr. in April, Charlo likened himself to Golovkin’s worst nightmare.

“When [Golovkin] goes to sleep at night, I know he goes to sleep thinking about me,” Charlo said. “He knows that there’s a young, hungry, 160-pound fierce dog out there. And that’s me. He knows the pressure is on him.”

“Jermall has power in both hands, and has been hurting and dropping guys with his jab for his entire career. When you look back, he dropped Cornelius Bundrage, Wilky Campfort and Julian Williams once-each with jabs, and he also hurt Heiland badly with a jab. Centeno is a tall, lanky, awkward guy and a good boxer, so that absolutely added to the aura of Jermall Charlo,” said Shields.

“In the first round, I told Jermall to just box him and make him think this is the way that you’re gonna fight. In the second round, you’re gonna surprise him. As soon as Jermall sat down in the corner, I said, ‘Now go and jump on him, right now.’ That’s exactly what I did. I knew that as soon as Jermall touched him he was gonna knock him out.”

The 31-year-old Monroe has lost to Golovkin (sixth-round TKO) and then-champion Billy Joe Saunders (unanimous decision) of England in May 2015 and September, but Shields said there is no pressure on “The Hitman” to one-up one-up Golovkin and Saunders.

“Jermall is going to get in there and fight the game plan that I’ve given him, and then, we want to fight Triple-G, which is who the WBC mandated for us to fight,” said Shields.

“If he doesn’t fight us, then we’ll go straight to Canelo, and if he doesn’t want to fight, then he can give up his belt, we’ll take it and we’ll fight somebody else because it’s hard to get these so-called top fighters into the ring. They absolutely do not want to fight Jermall.”